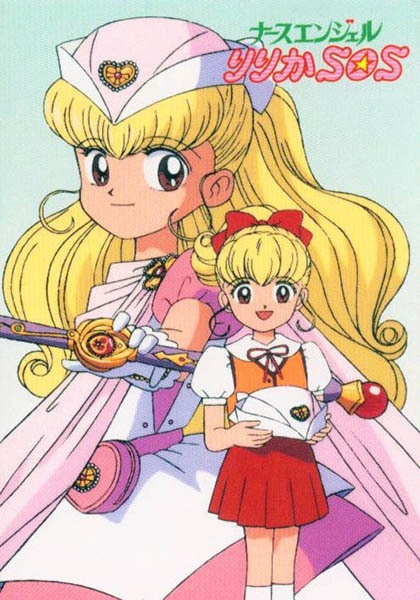 During the early to mid nineties, Sailor Moon was sweeping the nation, being one of the first magical girl anime to make it big in the US, and becoming wildly popular in Japan, so much so that it trumped other shows airing around the same time, Nurse Angel Ririka SOS being one of them. I first discovered this on Anime News Network in the form of a Buried Treasure article. Naturally, I got interested, so I tracked down the first episode and watch it. Unfortunately, I didn't get into the habit of completing shows quite yet (it was around the time I was eating up Shounen Onmyouji like a hungry wolf), so it took me a VERY long time to get back into this. Thankfully, two years ago I did, and I'm glad of it, as, while it starts off as rather cliche, it definitely stands out from other magical girl shows. It's sweet, charming, genuine, sincere, and when it comes to tear jerkers, it does NOT mess around.

Our main character, Ririka, is just a normal girl who goes to school and squabbles with her friend Seiya like cats and dogs. Her father works as a doctor, so she's familiar with lots of medical issues. One day, on her birthday, she receives a gift from the cutest, most popular guy in school, Kanou Nozomu. But the gift is a nurse's hat, and she isn't quite sure what it is until monsters begin attacking. When she puts on the nurse's cap, she becomes the Nurse Angel to fight them off. As it turns out, Nozomu's real name is Kanon, and he's from a planet called Queen Earth, which has been destroyed by the evil organization called Dark Joker, and now they're closing in on Earth. In order to defeat them, the Nurse Angel has to find the elusive Flower of Life. But she's having some trouble taking her duties seriously, but when things get serious, she steps up to the challenge.

The animation is your typical shoujo-y nineties look: big eyes, soft colors, elegant transformations, etc. It's not bad, though! Heck, I thought it looked a lot better than Sailor Moon at times! It does its job well, and I didn't see any corners that got cut. The soundtrack...eh. Do you ever come across a show/movie where the producers throw in music that's completely unfitting for certain scenes? Like, for example, playing happy, cheesy, and hopeful music during a really sad and tear jerking moment? Unfortunately, Nurse Angel Ririka SOS has fallen into this trap. Now don't get me wrong, the soundtrack for the series IS very good. It's composed by the guy who went on to do the soundtracks for Rozen Maiden and Yu-Gi-Oh. For the most part, the soundtrack fits the atmosphere well for low key scenes, but...for certain tear jerking scenes, they play the series' light and hopeful leitmotif, which I thought really dampened the scenes' emotional weight. I won't say which scenes due to spoilers. But be on the lookout, because it'll stick out like a sore thumb and be VERY hard to ignore.

The characters, understandably, start off rather cliche. We have the happy and energetic lead female (who, happily enough, ISN'T a ditz!), her childhood guy friend who she fights with a lot, the mysterious cute guy who gives her her powers, her two gal pals, the female arch enemy who's trying to win the mysterious cute guy's affection, the evil characters trying to take over the world, etc. But after a while, they really start to grow into genuine and likable characters, especially with the twists that the show pulls off. Even though they look and act cliche at first sight, they actually develop quite nicely, and even avert some of the common magical girl tropes. For example, Ririka's powers are dependent on a kind of liquid, and if she runs out, she can't use her powers, and even has to retreat at some points. I found that a really good use of magical girl items, as most of them usually just have an endless supply of magic and energy, and if the energy source is low, it creates more tension. Plus, I really liked the episode that developed the female clique leader who hates Ririka. The only characters I didn't really like are Mimina and her fairy friend whose name escapes me, but even they get better near the end.

The show itself is fun, nice, light-hearted, but still genuinely tasteful and full of heart. But do be warned, when things get serious, BY GOD do they ever! Especially the ending. I won't spoil it, but I will tell you this: if you watch it, everything you thought Nurse Angel Ririka SOS was gets torn to pieces and hacked at. No, the ending is NOT bad. It's actually extremely good! It's daring, it's bold, and doesn't give a rat's hat about any cliches or anything stupid like that! It's actually a really ballsy move, as most kids shows don't even DARE tread on this kind of territory! Not even to this day, and this is what sets Ririka apart from other magical girl anime, and it's MUCH better off for it! I love what it pulled! From what I hear, there were supposed to be three more episodes to really close off the series and resolve some plot threads, but apparently they never got aired due to low merchandise sales, which I can understand, considering Sailor Moon was still trumping every other show airing at the time.

If you're looking for a fun and sweet magical girl anime to give you your magical girl fix, but isn't completely saccharine, I wholly recommend this.
Collapse