In January of 2011, a cute looking magical girl show called Puella Magi Madoka Magica appeared in the midst, looking as generic as Sailor Moon, full of pink haired girls waving magical wands with a cute animal helping them save the world, using the power of love and friendship to defeat enemies and be happy forever and ever!

...That is, until episode 3 splattered blood on us.

The anime exploded. Madoka Magica became one of the most popular and most well known magical girl anime of the new tens. I really don't think I need to repeat what everyone else has said, so...here ya go! 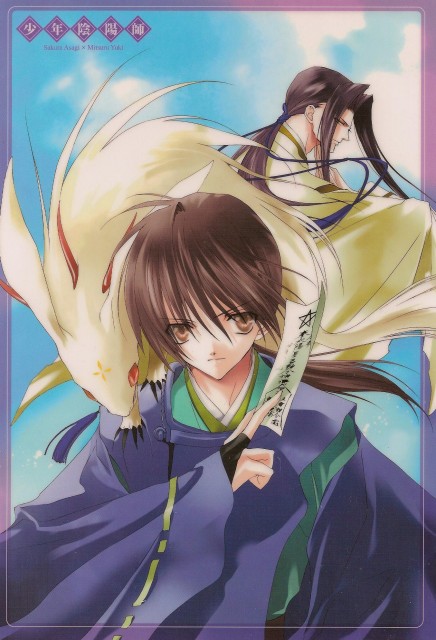 I've watched many anime over the course of my life. Some were good, some were meh, some were bad, some were sensory-rapingly horrible, but some were ungodly excellent, many of which made it to my top 30 favorite anime of all time. But none of those anime made as strong an impact on me as Shounen Onmyouji did.

I discovered novel art for it by accident in 2006. Soon, I found out the anime was going to premiere in October of 2006. Curious, I decided to watch it...and I'm GLAD I did. An anime that has a strong story. An anime that has engaging and well developed characters that look cliche at first sight. An anime that doesn't treat its audience like morons. An anime that's not afraid to switch from humorous to grim within one episode. An anime that doesn't pull any punches. An anime that uses minute details to build up to a bigger picture without you ever expecting it. An anime in which everything in it has a purpose and is used well. An anime that makes you feel for the characters and identify with their struggles no matter what era you're living in. An anime that knows what it wants to be, and is able to balance out what it can do and what it can't within 26 episodes. An anime that completely says "screw you" to all of your expectations and delivers shocking but well done twists without coming off as melodramatic or cheesy. An anime that averts and subverts so many typical anime cliches its not even funny. An anime with titanium BALLS to do what it wants and not give a crap about what its audiences will think. I own all the DVDs, I'm begging for the novels to get licensed, I want the PS2 game, I have a double-sided poster, I wrote a fan fic on this.

This anime will always have a place in my heart (unless With The Light: Raising an Autistic Child gets an anime adaptation, which it likely won't, but it SO DESERVES ONE!!!).

Moment #3: Discovering my number one favorite anime of all time.

Oh Dilandau Albatou, where have you been all my life?

(I was originally going to make this into two different posts, but I decided it wasn't worth it so I meshed them together into one post)