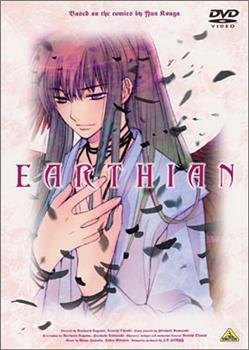 Let me tell you: I'm not a fan of shounen-ai or yaoi. I did try writing a yaoi fan fic in high school but not only was it extremely awful and very poorly written, but I lost inspiration for it. I wouldn't have heard of Earthian if one of my favorite internet critics, The Cartoon Hero, hadn't reviewed it (and it's a funny review. Check it out on his Zippcast account). Yet against my better judgment, I got curious about the OVA, and decided to check it out, because I was sad and gloomy and wanted something deep to get me out of my funk. Now, I love it when shows are deep and have underlying messages in them, whether its a kids show or an anime for teenagers. One of the reasons I love anime so much is that sometimes when you least expect it, they question humanity and how things are being handled in today's society. I love an anime that makes you think. If it's done right, it can be absolutely marvelous, but if done wrong, then we have no reason to think about it. Unfortunately, Earthian is the latter, sad to say.

In this series, angels come from a planet called Eden, and have observed humanity since their creation. Sometimes pairs of angels go to Earth and observe humans, as plus and minus checkers. Plus checkers report on positive aspects on humanity while minus checkers report on negative aspects. If the angels decide that humanity's progress reaches -10,000, they will destroy them. But they can discriminate against their own species, as if an angel goes against Eden too many times, their hair and wings turn black, which is grounds for discrimination and hatred from white winged angels. Chihaya is one such black winged angel, but he was born with his black wings and hair. He and another angel, Kagetsuya, go to Earth and get caught up in some events that could entail humanity's destruction.

I want to like this anime. It has so much that I like in it, but not only does it not live up to its potential, but it leaves many questions unanswered, plot threads hanging on for dear life, and many events not properly resolved, especially since there's four episodes, none of which bother to explain what's going on. I hear there's more explanation in the manga, but I haven't read it. I plan to eventually. But even not reading the manga, you can tell that there's so much crammed in four episodes that you don't have time to really get to know the characters and why they behave the way they do, and everything goes by so fast. It's symbolism is extremely ham handed, none of it is subtle, the villain is cliche, annoying, and we have no reason to care about him, and everything just gets thrown at you without going into why you should care about these characters and their stories.

Speaking of characters, they're also the weakest part of the story. The villain is your stereotypical mad scientist who wants to create the ultimate weapon and destroy humanity, two of them are forgotten without a second thought, and Chihaya, while I usually like characters like him, is useless and whiny. Like The Cartoon Hero says and I echo, he always causes trouble, is always either getting kidnapped or beaten up, always gets rescued by Kagetsuya, does things without thinking, and absolutely cannot do anything on his own. But I hate Kagetsuya even more because of the way he treats Chihaya. While I can understand some of his grievances, he treats Chihaya as though he's some troublemaking kid constantly, never praises him for good things he does, always calls him names, and is always harsh with him. And the thing is? They have sex once. One, it comes absolutely out of nowhere. Two, there was never any hints or implications of them having a relationship, let alone a romantic one, and three, with the way Kagetsuya treats Chihaya, I can't fathom why Chihaya would want to be with Kagetsuya romantically. Even if Kagetsuya does rescue Chihaya on occasion, I don't think its out of genuine concern for his well being, but only so he doesn't get in trouble with Eden. At one point he even locks Chihaya out of the apartment because he came home late for dinner. Kagetsuya has absolutely NOTHING positive to say about Chihaya. If I was in a relationship like this, I'd get the heck out of there because I would not want to spend my life with someone who constantly belittles everything I do and isn't grateful for the good things I do. And I've dealt with people exactly like Kagetsuya both in real life and online! Sorry, Kagetsuya is nothing but a bland, static, pathetic, and harsh character and I have absolutely no reason to care about him. What is it with anime convincing us that harsh people who constantly belittle you and call you names and blame you for everything is your perfect romantic partner? I don't approve of this construct.

For its time, the animation...admittedly isn't all that good. When the characters move, they're all jerky and sometimes it feels like entire scenes have been cut out. The character designs are good and we can tell who's who, but considering they're Yun Kouga's designs, they didn't look like they translated well to animation, and animating them clearly wasn't the producers' strong point. Plus the colors are extremely washed out, and it doesn't feel all that good on the eyes. The voice acting in both the English and Japanese versions are forgettable at best, terrible at worst, with the English dub being hilariously bad, with wooden performances, Dr. Ashino having a Texan accent, and lots of badly scripted lines ("Don't let them GOOOO!!"). But even the Japanese version isn't safe from the occasional bad performance, such as Messiah's garbled screaming, Chihaya's high pitched whining, and Dr. Ashino sounding like he smoked too many cigarettes. Seriously, Shiozawa Kaneto's performance as Devimon was better than this!

Even the soundtrack isn't any better. The music isn't exactly memorable, nor did it make much of an impact on me...except for the first episode's ending, Mother: For The Earthian. It's one of the loveliest, most inspiring, most beautiful pieces of music I've ever heard, and it singlehandedly made my top 5 favorite ending songs for how wonderful it is. It also has a very good (but VERY HARD TO FIND) insert song in Good Night by Kingo Hamada. But those are pretty much the only genuinely good things about the anime. It had so much potential, but all of it was wasted, and it didn't make good use of the time it did have, resulting in a convoluted mess with characters we just cannot root for. Had it been given more episodes, we might have gotten something better depending on the staff and production team. But this anime does make for good riffing material, as proven by The Cartoon Hero's review of it, which you really should check out. He's hilarious and good at critiquing at the same time!

This anime could have been so much better, but at best, it's just plain average and bad. If you want to make something deep, this is not the way to do it.

Welp, I finally finished episode one and...OH MY FREAKING GOD THAT WAS AMAZING!!! I was so convinced I'd hate it but it's already done so many things right that annoyed me in the anime!
1. Usagi actually manages to fight the enemy on her own instead of freaking out the whole time! She did freak out a little but she got her act together! Yay for realizing what's important!
2. Naru actually suspected her mother was acting strange! I found that to be really well done, because if my parents were acting strange, I'd be able to figure it out too.
3. The pacing actually felt great. Nothing was rushed, nor was anything going too slow.
4. Luna! I could sing so many praises about her it's not even funny! Wanna know why? SHE'S NOT AN ANNOYING NAG THIS TIME AROUND!!! One thing I always hated in the anime was the fact that she always seemed to get on Usagi's case, basically forcing her and even threatening her to go into battle, and even when she did a good job, Luna never seemed to praise Usagi for her good efforts. THIS IS NOT THE CASE HERE!!! Luna is actually genuinely nice to Usagi, lets her decide to be a senshi on her own giving her time to make her choice, gives Usagi space, praises her for doing good, encourages her to fight without pushing too far, and even gently explains what she needs to do without resorting to petty name calling or being a nag. THANK YOU PGSM FOR IMPROVING ON LUNA'S PERSONALITY!!!
5. Queen Beryl looks so far out, though I think it works here since she's supposed to be a crazy villain here.
6. I find it kinda interesting that they turned the arcade into a karaoke bar (is that what they're called? I know kids visit there so I don't know what else to call it).
7. Naru's played by the girl who sings the Ouran High School Host Club anime theme song. Yes.
8. Usagi's voice isn't annoying, and her calling her attacks isn't annoyingly high pitched either! And she actually holds her own in a fight and WANTS to fight! Yay!
9. The music is wonderful.
One thing I can't take seriously is Jadeite. His hair is so massively curly that I can't help but think he came right out of some beach side American romantic comedy movie! Yeah, the special effects can be kinda dumb, the fight scenes aren't that good, and the villains are over the top, but not even those detracted from my enjoyment of the show! I am SO watching this over Sailor Moon Crystal (not that I hate Crystal. I'm just not motivated to watch it at the moment. Got too much on my plate as it is).
Collapse