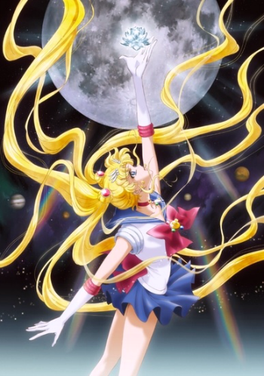 I give this reboot of one of the most famous magical girl anime of all time...a 75/100.

Sailor Moon has won fans all over the world, and everybody loved both the anime and the manga. Love for this eponymous magical girl series festered on decades after its inception. When a reboot of the original anime was announced, fans were excited. Two years later, we finally got Sailor Moon Crystal...unfortunately, nowadays, Crystal is seen as spoiled goods, a blemish on what made Sailor Moon great, and nowadays, people hail the 90s anime as being the better adaptation despite it having just as many problems, if not more. Despite it being a straight adaptation of the manga, people have lambasted it left and right, fans and haters alike, for a variety of problems: bad animation, static characters, brisk pacing, no filler in order to give the characters screentime, etc. Despite the show still having just as many fans, you can't go anywhere without seeing hate for Sailor Moon Crystal, with some saying its the absolute worst anime ever.

Now, it's okay to not like something. As long as one expresses their dislike of something in a rational manner that doesn't hurt others, that's okay. However, on places like Tumblr, the hatred for SMC has grown to downright ridiculous levels, and people are hating it for less than rational reasons. I've heard people accuse it of being ableist, harming queer women (HOW?!), promoting anorexia, endorsing selfish behavior, rape culture, gay erasure, misogyny, etc. Worse than that, they even use their hatred to attack other people who happen to like it for what it is and don't mind its many problems! Good lord! It's one thing to not like a show, but its another thing to bump said hatred to irrational levels and attack people for even so much as acknowledging its existence. I don't like ecchi shows or porn, and you don't see me attacking other people for liking them! Heck, my friend Paul LOVES Ranma 1/2 and I don't, but we respect each other's preferences and are still friends! My friend Sami LOVES Levi from Attack on Titan and I don't, but do you see me attacking her and calling her names and making up lies about her for loving him? NO!

After seeing all the completely weird hatred being bombarded on SMC, I decided to watch it again. I tried to watch it when it came out, but had to drop it due to other obligations. Honestly, I don't hate it, but I don't necessarily like it either. Rather...I kinda pity it. It knows what it wants to be, and I would much rather watch SMC than most other anime that have been saturating the industry at the moment, especially the stupid ecchi/harem anime that have been diluting the industry for the past few years. It has a lot of potential, and while it's definitely not a masterpiece considering how many problems it has, there's still a lot to like about it. I'm pretty sure a lot of modern kids today would love seeing a show like SMC.

The story's about the same as the manga. A lazy, clumsy girl named Usagi Tsukino just wants to be normal. She doesn't do well in school, she prefers to hang out with her friends or go to the arcade to hang out with one of the cute employees, and she wants to eat, read manga, and laze around, like most girls her age would. One day, a cat named Luna appears before her, giving her a magical brooch that turns her into a warrior named Sailor Moon, who has to fight the evil Dark Kingdom, who intends to steal something called the Legendary Silver Crystal and use it to destroy the world. Joining her are Sailors Mercury, Venus, Mars, and Jupiter, and the mysterious Tuxedo Mask, and while she is reluctant at first, she decides to fight the Dark Kingdom and save the world, knowing all of life is at stake.

I'm kind of torn on the animation. On one hand, I won't deny that Toei's lack of budget really shows throughout the show. Some body parts like eyes and mouths are out of place, the girls are designed in ways that make them look like plastic barbie dolls with unrealistic anatomy, and the CGI is definitely very cringeworthy. I've seen far worse CGI so I'm personally not bothered by it, but the transformation sequences do make the girls look like plastic barbie dolls that don't have much life to them. On the other hand, the artwork is for the most part very faithful to the manga. The character designs are sleek and the hair movement can be downright beautiful when it wants to be, the senshis attacks are a lot better animated (I really like how Sailor Mars' Burning Mandala looks. I think it looks better here), and the costume designs are luscious. The whole show, especially when the girls go to Crystal Tokyo, has this mystical, ethereal quality about it that I think was present in the manga as well. I think Crystal managed to capture it perfectly. Plus, I love the detail the animators put into things in the background, like how Usagi's bedroom looks or Mamoru's bedrooms. The decor says a lot about their overall characters.

When I heard that Yasuharu Takanashi was composing the music for this series, I was convinced to watch SMC. He's one of my favorite modern day composers, and worked on a lot of anime I like, such as Pretty Cure, Konnichiwa Anne, etc. No surprise here, as the soundtrack is very good and solid. The 90s soundtrack was very dated, so hearing more fitting music for the series really made SMC work musically. The opening theme is okay, rather J-poppy and not nearly as iconic as Moonlight Densetsu is. But it's not bad. Hearing the same theme song for over 100 episodes can be boring, so Moon Pride was refreshing. The ending theme is the best though.

I won't lie, the characters and characterization is where Crystal really suffers. The manga was no different, but it really stands out here. Usagi does mature throughout the show, which is fine, but as much as I like the other characters, the other senshi seem to come off as props to make Usagi look good. Their lack of characterization really detriments the show, especially since the arcs are being adapted into 12-14 episodes, leaving little room for fleshing them out and showing the girls' lives when they're not fighting evil. I will say this though: Mamoru actually has a personality in this version! He doesn't come off as annoyingly prickish like he does in the 90s anime, though I still think his live-action version is the best. The villains also suffer in the characterization department, as they're just reduced to their being evil for the sake of being evil, or random mooks who get killed after one episode. The 90s anime definitely did better in fleshing out the villains and making them come off as more than just petty villains. Really, the only character who even has a good character arc is Chibiusa, and trust me, she is NOWHERE NEAR as bratty as she was in the 90s anime, so rest assured, she's MUCH more tolerable here. Usagi and Chibiusa are okay characterization-wise, but the rest of them are woefully underdeveloped, making any emotional moments lack any meaningful impact.

Honestly, I think SMC's problems with storytelling and characterization would be rectified had the creators been given the chance to make each arc 24-26 episodes long rather than 12-14. If they did that, it would allow for some filler to fill up space between the important parts and give the girls a chance to develop and show what they're like outside of saving the world. The live-action version is beloved because it made optimal use of its long episode count, focused only on one arc, and gave the girls episodes that just allowed them to develop, flesh themselves out, and show what they're like when they're not saving the world. Because all the arcs are 12-14 episodes, everything is extremely compressed, not allowing for much breathing room. I think this is SMC's greatest flaw: the short length of each arc. The story SMC wants to tell is grand, epic, and compelling, and it knows what it wants to be. It's ambitious, but because of time constraints, the show is unable to realize its full potential and tell the story it wants to, characterization included.

Even so, I don't hate SMC. I don't LOVE it, as SM's live-action adaptation will always be my favorite. But I do like SMC a lot more than I do the 90s anime, and if you gave me a choice to either watch this or some stupid ecchi anime like Ro-Kyu-Bu, Nakaimo, or Kanokon, or basically every incest anime ever (I'm looking at you, Kiss x Sis!!!), I'd take SMC any day. It's not a perfect show. Let's face it, no media art form will EVER be perfect, and we shouldn't expect SMC to be either. At the same time, I really don't think SMC deserves all the bile that it gets. I don't watch anime in order to look for representation or accuse it of endorsing bad things or any of that stuff. I watch anime because it gives me what most American cartoons nowadays don't: substance. Serious, compelling storylines. Characters who we can care about who don't do nothing but talk about make-up or boys or are super hot and sexy. That's why I loved shows like Pokemon, Digimon, and Yu-Gi-Oh as a kid, because they were bold, daring, serious, didn't try to hide unpleasant things like death or family problems from us, and didn't talk down to their audience. SMC is the same. It takes its audience seriously and wants to be something that can appeal to all ages in spite of its problems. I think, had SMC come out when I was a kid, I probably would have loved it.

Sailor Moon Crystal isn't the best adaptation of the manga, but if you manage to look past its flaws and appreciate it for its merits, it's still a serviceable show that I think will really appeal to kids. Come on, let's be honest. It could have been a heck of a lot worse. At least it's not Breadwinners or The Nutshack or even every ecchi anime ever!
Collapse