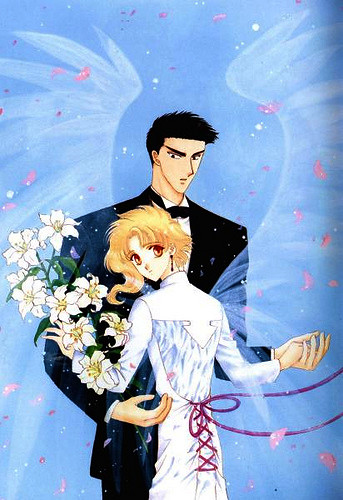 2005 was the year I began dipping my entire being into the anime and manga scene. I had discovered a whole world of stories and fantasies that were completely different from the Western cartoons I was watching growing up. I was amazed at how bold anime and manga could be, and devoured whatever I could watch or read. Among those manga, Wish was one of the manga that stuck with me the most. I own all four volumes, and have had them for eleven years. Even now, reading it still tugs at my heart, and the themes resonate with me unlike any other. I was only just starting to get into reading manga, so I didn't own many back then. Over the years though, I wondered if Wish could still hold up. After I re-read it over the past two days, my answer is yes, it still holds up wonderfully.

The story is very basic. Shuichiro Kudo, a 28-year-old doctor and bachelor, is perfectly happy with his life, though he doesn't look it. One day, he finds a tiny angel stuck in a tree and saves her from being attacked by a crow. The angel, Kohaku, is grateful to him and wants to grant him a wish. But Shuichiro says he doesn't need any wishes to be granted, even though Kohaku begs to try and grant him a wish to express her gratitude. But the more Kohaku stays with him, the more Shuichiro winds up getting entangled in Heaven and Hell's affairs. Two angels, two devils, and two servant devils wind up living with him under mysterious circumstances, and Shuichiro and Kohaku learn that there are some wishes that cannot be fulfilled alone.

Clamp has been very famous for their beautiful artwork, especially when they first started out. After reading a lot of their manga, I can say that Wish's artwork is quite beautiful, even by 90s standards. I mean, what's there to say about Clamp that hasn't been said already? Everything is filled to the brim with elegance and dignity, from the way the angels and devils are designed, to the work that was put into the world the characters live in. The art is sumptuous, and even now, it really holds up.