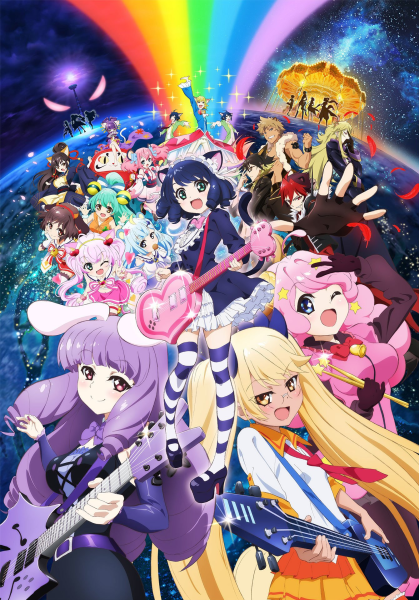 I give the second season to one of my favorite guilty pleasures ever...a 75/100!

Usually, when a show receives a second or more seasons, one of several things happen: Either the second season improves on the first one, does the exact same things as the first one but with different situations, or suffers a big decline in quality and winds up not grasping the magic that made the first season so good. The first season of Show By Rock was a cute and fun show, but it was held back by adhering to tired cliches and a lack of expanding on its core cast of characters, especially Cyan. But it's rare for a second season of a show to actually improve on the first season and make an effort to fix its flaws. Not all of them, mind you, but I can wholeheartedly say that Show By Rock # really improved on the first season!

Taking place right after the events of the first season, life in Sound World is back to normal, with everyone going about their lives, particularly Plasmagica trying to make it without Cyan. Unfortunately, the peace doesn't last. Dagger has recruited a new band to restart his attempt at world domination, but ironically, his return is dwarfed by the revelation that a mysterious being known as the Queen of Darkness threatens to eliminate music entirely. The people of Sound World receive word from a band coming from the future, Ninjinriot, that the Queen of Darkness successfully took over Sound World, and went back to the past to warn them about it in advance so they can find a way to stop her once and for all. With this new knowledge in mind, there's only one thing to do: Bring Cyan back and have her work her musical magic to save Sound World a second time!

So yeah, the second season still rehashes the usual "save the world from an evil entity" plotline this time around, and Cyan is still shilled as the magical chosen one without any real explanation whatsoever. Those parts of the show haven't changed a bit. But other than those two things, the creators seemed to make an effort to fix at least a good portion of the first season's flaws. For one, while Dagger as a villain is still as cliche and SatAm cartoonish as usual, he doesn't get any focus this time around, as the second season features a new main villain, and some minor ones, with actual, fleshed out backstories that explain their descent into villainy while still managing to make them somewhat sympathetic, even if said backstories don't excuse their actions. Not gonna lie, I like the second season's villain much better than Dagger.

The production values and soundtrack are still top notch as usual, even if the show still goes overboard with its sparkly moe aesthetic. Then again, it wouldn't be Show By Rock without its overdose of sparkle and moe cutesiness, now would it? But more than that, SBR's second season fixed a major flaw that I previously had with the first season: Actually bothering to give the characters focus episodes and development. In the first season, the only characters who ever really got fleshed out were Chuchu and Rom. Season two finally got around to fleshing out a good portion of the main and side characters, many of whom desperately needed it, such as Moa, Aion, Rosia, Shuzo, and a few others. Not all of them got this treatment, mind you, as several other new bands are introduced just to be cameos from the game (Looking at you, Dolly Dolci. I don't like them. They were just really annoying), but the characters that actually matter are finally given the development they deserved. Granted, I've seen other shows do it better, but considering how the first season struggled with it before, I'm willing to give season two a pass here, as it still made the effort. The show also took the time to flesh out the members of the two new bands who appear, Arcareafact and Bud Virgin Logic, all of whom have their share of focus, strengths, weaknesses, and so on.

Another thing that makes season two better than the first season is the fact that it also tried to flesh out its setting a bit more. In the first season, every person in Sound World has what's called a Melodisian Stone, which glows brightly when bands perform awesome music, but the show never bothered to really explain what they were or where they come from. Season two actually provides a solid origin story for the Melodisian Stones, something that honestly blew my mind when I first watched it when it first aired. Most shows of this nature generally don't bother with worldbuilding, or at the very least only put in a barebones effort. The fact that Show By Rock, a franchise made by a company that typically makes products for children, still cared enough about its setting to flesh it out somewhat is admirable, even though I admit I have seen other shows do it better.

However, as much as I want to love SBR season two and lavish it with praise, as you can tell by the rating, it's still not a perfect show, and still has its own problems, barring the ones carried over from season one. First off, one character has a brief backstory established in the first season, only for an episode of this season to completely retcon it and give him a new one out of whole cloth, contradicting what it had established about him earlier. Granted, I like said character's new backstory, as I feel it makes more logical sense than what season one established about him, but it'd be better to commit to just one idea rather than say a character is one thing and then going against it later. You'll know which character I'm talking about if you watch both seasons, and no, it's not Rom. His backstory was actually consistent. Secondly, while I'm happy that Uwasanopetals got less screen time this season and don't spend their time whining all the time, there's a subplot involving them that seems like it'll be the start of something bigger, but it never goes anywhere, nor does it really get any real resolution. Considering SBR has a fourth season coming out, for all I know they might address this in there, but as it stands, maybe SBR would have benefited from just saving that subplot for season four, rather than just hinting at it in this season and not doing anything with it. And in case anyone's wondering, yes, SBR still indulges in having certain characters show off a lot of cleavage and unnecessary close-ups of jiggling boobs. Though thankfully that's as far as any fanservice in this show gets. But does any of this kill my enjoyment of the show in any way? Hell no! I still love SBR and all its kooky, sparkly, musical moeness, and I'm willing to be thankful for the progress its made rather than dwell on what it could have been.

While the sequel still has its own share of issues, Show By Rock season two really tried to fix the first season's flaws admirably while still remaining a fun, entertaining show. And yes, you can bet your ass I'm looking forward to season four.
Collapse