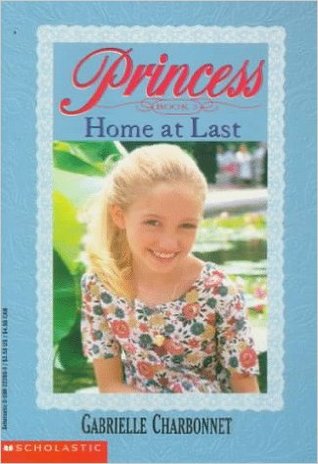 (Sorry if the picture is of low quality. It's an old, out of print book series from the nineties, so any pictures I find are either too small or really grainy. This was the best I could find)

You know how most people take certain forms of media and give them a modern coat of paint? The 90s movie Clueless is based on the Jane Austen book, Emma, despite managing to stand on its own feet as its own entity. The Romeo and Juliet movie starring Leonardo DiCaprio was also a modern take on Shakespeare's medieval tragic romance. Heck, most people I know write fan fics for their favorite anime, games, and books and make modern day AUs out of them, me being one of those fan fic writers. But one book I know, A Little Princess, also got an alternate modern AU book series, but it was very obscure, and not many people I know talk about it. That series is the Princess trilogy, by Gabrielle Charbonnet, also known as Cate Tiernan. The books are Molly's Heart, A Room In The Attic, and Home At Last. As a modern (at the time. These books were written in 1995) adaptation of an old classic novel from the 1900s, it does stumble a lot, but it does surprisingly manage to do some things better than the original source material.

Being a kids book series, the story is pretty simple. Molly Stewart is the daughter of a famous filmmaker. But when his most recent project requires him to go to Brazil, he has no choice but to send his daughter to a special boarding school in Boston, much to Molly's displeasure. Despite her homesickness and yearning for her father, she fares well. She makes some friends, gets good grades, has special privileges that most other students don't have, and has it pretty good...until the day she hears that her father died from cholera. The headmistress of the school, Miss Thacker, is appalled by this turn of events and makes Molly into a "charity" student, making her work like a servant and treating her like garbage. Molly tries hard to deal with her new situation, but it may be too tough for her to handle.

The story itself is nothing original. It's a basic riches to rags and back to riches story, not unlike Cinderella or even the original A Little Princess. If you're familiar with that book, you can easily draw parallels and see which characters are based on who. Molly is obviously Sara Crewe, Lucy Axminster is Ermengarde, Evie Lucas is Becky, Celeste Foucher and Laura Bailey (No, not that Laura Bailey) are Lavinia and Jesse, Miss Thacker is Miss Minchin, etc. The only character who escapes being compared to A Little Princess is Shannon O'Toor, a girl whom Molly befriends but eventually turns her back on her in favor of the popular crowd. But even though you can see parallels to A Little Princess, the characters still have their own personalities and quirks that differentiate them from their counterparts. Becky in A Little Princess was meek, easily frightened, and clumsy due to past abuse. Her counterpart, Evie, is more guarded, bitter, abrasive, and outspoken, never afraid to speak her mind even if it gets her into trouble. Ermengarde had to deal with an overbearing father and lack of booksmarts, and her counterpart, Lucy, was dealing with her parents' nasty divorce and feeling like she doesn't mean anything to her family. You can have characters be counterparts to others in a different form of media and still manage to make them stand out and not have them be carbon copies, and the Princess trilogy manages to succeed in this one.

The biggest standout is Molly herself. I've seen people complain that Sara Crewe came off as being rather Mary Sue-ish: always nice, never complaining, always gets what she wants even when the world hates her, etc. You won't find any of that with Molly. When her situation gets bad, Molly mourns her father, sometimes even getting angry at him for dying and leaving her alone. She complains. She calls people out when they do something bad, like abandon her in her time of need. She tries to be optimistic but has her limits. She breaks down. She makes efforts to escape, even though they don't go well. In that aspect, Molly seems to be a much better, more three dimensional version of Sara, as she's much more realistically flawed and more like a real kid trying to deal with a bad hand that fate dealt her. You never forget that she's still a kid and does things that a real kid would do, and sometimes the things she plans aren't too well thought out, which makes things more relatable and interesting. And not just Molly: most, if not all, the protagonists are reasonably well developed. Lucy is often impatient with her family problems but still tries to be a good friend to Molly. Evie is guarded and bitter due to bad experiences and is more confrontational than her peers. Shannon O'Toor once befriended Molly after she defended her from bullies, but when the latter became poor, Shannon wanted to be part of the in-crowd and went with Celeste. Another thing this book series does better than A Little Princess is that all the characters have some kind of backstory. They have backgrounds, real problems that people in their positions can relate to, and they act like real kids. You never feel like they're anything more than they are, which is great.

Of course, not every character has been given that treatment. Like A Little Princess, its villain characters are still typical cardboard evil villains who hate the object of their anger for no reason. Miss Thacker is just a clone of Miss Minchin, nothing more, and her husband, who is based on Amelia, is just an average henpecked husband whose wife always bosses him around. He was kind of a waste since he barely gets to do anything. He doesn't even call his wife out on the crap she puts Molly through, unlike Amelia who did so with Miss Minchin in A Little Princess. Miss Thacker isn't even given a suitable motivation for disliking Molly. Heck, the third book even outright says that Miss Thacker herself couldn't understand why she hated Molly so much. And unlike Miss Minchin in the book, Miss Thacker doesn't get karma handed to her, which feels kinda unsatisfying.

Now onto the rest of the books' flaws. The books themselves are very small, a little less than a hundred pages, and the prose is very beige and simple, leaving nothing to the imagination and making it easy for kids nine and up to read without much trouble. I think the books could have benefitted from either being combined into one whole book and made a lot longer, that way more aspects of the characters could be explored. Plus, the books are definitely very dated, with characters making references to the Babysitters Club books, popular boy bands from the time, fashions and trends, etc. They don't detriment the story in any way, but they might be lost on readers who were born in the 2000s or later.

I kinda feel bad for pointing out the books' flaws, because in some ways, it does things not as well as A Little Princess, but it also does things better than it, too. The Princess trilogy is definitely not a bad book series in any way. Yes, it's definitely aimed at children, but that's not always a bad thing, and it did what it set out to do: give its own modern take on an old classic, and in that aspect, it pulls it off very well, and even manages to implement scenarios and subplots into the storyline in ways that make a lot of sense. The characters are much more three dimensional than A Little Princess, though they're still admittedly kinda bland by kids media standards. Still, considering the characters have more flaws and more realistically portrayed here, I mean that as a compliment. I'd definitely recommend this to anyone who would like a good old-fashioned kids story.

Definitely one of the better modern takes on an old classic, though it's still a cute little kids series.
Collapse