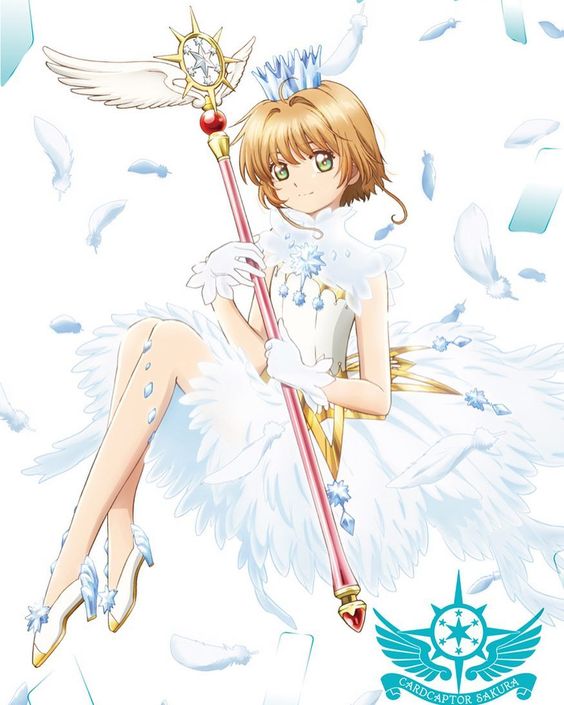 I'll admit, I never grew up with Cardcaptor Sakura (Which reminds me, I REALLY need to finish my review for the original series). I remember seeing commercials for CardCaptors when I was younger, but I dismissed it as a shallow girly girl show that was about girls who did nothing but talk about fashion and boys. Yeah, I was a pretty judgmental kid. But I did watch bits of the original series later and my opinion on it changed, even more so when I finally watched the whole thing during college. While I wouldn't consider it to be one of my favorite magical girl series ever, I can respect the impact it had on the industry, and I do like it as a whole. I even own the original series on Blu-Ray and the entirety of the manga. So when it was announced that a sequel was being made, with an anime adaptation soon to come, I and many other CCS fans were absolutely ecstatic, and devoured it like crazy. So why the low rating? Well...let's go over it, first.

About two or so years after the original series ended, Sakura Kinomoto and her friends have started middle school, ready to start new lives. Sakura and Syaoran are dating, and they even make a new friend in a girl named Akiho Shinomoto and her butler Yuna. Things are going pretty great...until Sakura starts having strange dreams involving a mysterious robed figure, and all of her cards suddenly disappear out of thin air. Strange things start happening in Tomoeda again, and when Sakura's staff transforms and she gets new cards, they suddenly become transparent, with new forms and names. It's up to Sakura and friends to figure out just what is going on before it's too late.

It's a rare feat for sequels to not only reunite the original cast, but the original staff and animators, especially if a lot of time has passed. Most creators start completely new, with new staff, new animators, new voice actors, all that stuff, due to the original staff being unavailable for whatever reason or to just cut back on unnecessary expenses, which is understandable in some cases. Not only did the producers bring the original cast and staff back, but even the same animation team and company. The animation is luscious and beautiful, just like the original, just with a new coat of paint and with some CGI sprinkled about, what with hand-drawn animation falling out of use. I can safely say that in this department, the animation hasn't lost its touch at all. The colors are bright, the animation is nice and fluid--though not without a few wonky spots every now and then--and the characters, despite being a little older, haven't changed much in appearance at all, so they're still very much recognizeable, both in appearance and personality.

The music is still the same as the original, with a few new tracks sprinkled in to distinguish it from the original. Considering the same composer worked on the original and this, it makes sense that re-used pieces would be used, and they fit nicely here (Take note, Precure series). Plus, there's new music here to keep it separate from the original, so it's not like the creators were being deliberately lazy or lacking in budget (Again, take note, Precure). The new opening and ending songs are very nice too, and they even got Maaya Sakamoto to sing the opening theme again, since she also worked on the original series, which is nice.

Clear Card is full of references and call backs to the original series. It's really neat when the creators actually care about continuity and remind the viewers that certain things haven't been forgotten (You could really learn from this, Pokemon), which many sequels or reboots tend to completely forget about, especially for long running series that go on for years and years. Heck, the anime even brings back Meiling, a character who only appeared in the anime. This extends to the characters, though I'm a bit conflicted on this one. Sakura and her friends are still themselves, keeping their original personalities and the character development they received from the original series, so the creators did a good job in keeping them in character and not changing them so much that they're not themselves. Sakura's still sweet and energetic, Kero's still hotblooded and perky, Syaoran's still reserved but kinder than before, Tomoyo is still polite, caring, and Sakura-crazy, so on and so forth. But I think the creators tried a bit too hard in keeping them the same, to the point of flanderizing some of them a bit. I feel Tomoyo in particular was hit with this especially hard. In the original, while her habit of wanting to record Sakura's exploits on video is a big part of her character, it was still just one part of it. She still had other aspects to her personality, such as her politeness, her kindness towards others, and she even helped Sakura in catching the cards on occasion. Here, it seems like Tomoyo's entire character revolves around videotaping Sakura, and it borders on creepy at times. Syaoran doesn't really do much in the anime, unfortunately, and the few times he does help out are really short and severely under-utilized. There's rarely any real conflicts the characters go through and they're all so excessively nice to each other that it borders on saccharine and overly sweet and cutesy. The two new characters, Akiho and Yuna, are okay, but Akiho's constant apologizing for supposedly causing trouble and "being a burden" even when she did nothing to warrant such a claim just got really annoying after the first five times. Now, I haven't read the manga, so for all I know, things might be different there. I ought to read the rest of it later, since it apparently does explain more on Akiho's past and why she's so deferential about...well, everything.

Another problem that persists here, which was also a problem the original series had, was a lot of filler episodes. Now, filler in and of itself isn't a bad thing. Depending on the series and the execution, filler episodes can be a great reprieve from a daunting storyline and the high stakes conflicts. Some of my favorite episodes from certain series happened to be filler episodes because they were so well done and well executed. But as certain series like Naruto, Bleach, Rurouni Kenshin, and a few other long runners can prove, filler episodes that are poorly done can really hurt a series' quality. Clear Card is unfortunately no exception. Some episodes are relatively decent, but others were straight up unnecessary and I feel didn't add to the story much. I mean, there's an ENTIRE episode where everybody talks about lunches, food, picnics, making lunch for someone, and openly talking about how awesome the food is and literally nothing else (You'll know which episode I'm talking about)! I guess part of this was because the manga was still running when the anime was being made, and I can understand not wanting to overtake the manga, but Clear Card has so many unnecessary episodes that could have been better off adding to the story and explaining a lot of the series' overarching storylines. Instead, Clear Card just meanders and plods along throughout its entire run, and that's not a good thing.

Now, Clear Card's existence in and of itself isn't bad. It's still true to the original source, keeping the tone, mood, and the characters in character, which few sequels can boast. I really want to like Clear Card more than I do, and some parts of it I liked better than the original! Unfortunately, the anime has a pretty huge black stain on it, and that's the final episode. The ending was just...bad. Not only did it not feel like a finale, it was a complete and utter cop-out in that it sets up so many interesting things, but then the reset button is literally pressed and nothing is ever resolved! Every conflict it introduced and the revelations it showed are rendered completely pointless, along with the rest of the series! Why even bother building up to this if you're not even going to make the effort to address or resolve it?! You can't just go out of your way to set up this underlying conflict and just pull the rug out and expect the audience to just accept it! Not only that, it makes all of the filler episodes even worse in context, because instead of meandering through its run time, the creators could have used a bunch of those episodes to address the plot issues it set up! The fact that it didn't really hurt this series in more ways than one, making it seem much more like a cheap nostalgia cash grab than it intended to be, and all of its efforts went down the drain.

Crap. I was really going to give Clear Card a positive review, and then it has the nerve to pull this. Why must some great series have terrible endings? I try to give them the benefit of the doubt, but when it pulls stuff like this, it really leaves a nasty aftertaste. Thanks a lot, Clear Card. You've managed to piss me off in the end.

So if you want to watch this sequel, that's fine! It's a nice little nostalgia trip! But don't watch the final episode. Seriously, don't.

So I tell my mom why I was mad at her the other day...and she's all "Okay. Fine." And she doesn't even apologize for yelling at me the other day! Ugh, this is what I hate about her! She gets mad at people over stupid things and doesn't even make an effort to acknowledge what she's done or even apologize! Ugh! My God, she's more stubborn than a mule! She expects ME to apologize when all I did was ask her a question! Why should I be the one to apologize when she was the one who freaking yelled at me for something not worth making a fuss about?! She thinks she's above everybody and that she doesn't have to admit to any wrongdoing on her part! I can't stand this!
Collapse