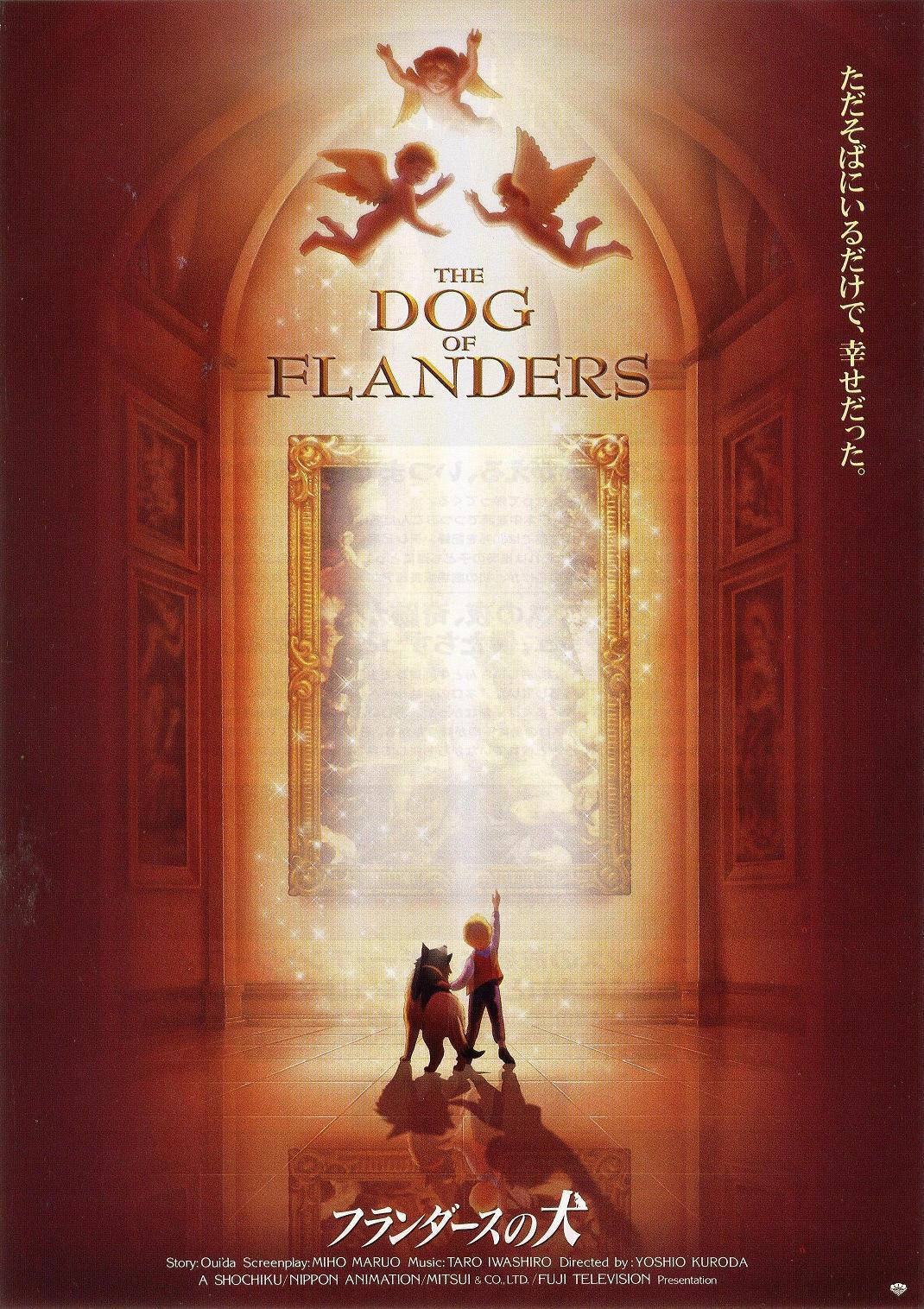 I give this charming, heartbreaking movie about a boy and his dog...a 97/100!

I've watched many movies throughout my childhood. Namely the Pokemon movies, some Disney movies (namely Aladdin), and others. But none of them have really made a huge impact on me because of the limited time they have to get made. Characters aren't always developed, plots are too narrow, and some just turn out plain terrible. Before 2010, I had never even HEARD of anything called The Dog of Flanders. I only learned about it through this review from one of my favorite anime bloggers, and he considers it his favorite movie ever. When I first read it, I thought, "Can a movie really be this good?" Curious, I tracked it down and found it on YouTube...and I was absolutely not prepared for what I saw, and boy am I glad I followed his recommendation. This movie, to me, is a masterpiece on every level. This is my personal gold standard for not only animated movies, but for movies that are adaptations of books, and movies as a whole overall. I'll try to be as objective as possible, but I can't help but gush about it, as it's such an underrated movie that rarely gets the appreciation that it so deserves! But I'm gonna tell you all about it and I'm not ashamed to say it: Dog of Flanders is my number one favorite anime movie of all time, and movie of all time in general.

What's the story? A fairly simple one, really. In 19th century Belgium, a young boy named Nello lives an impoverished but happy life with his grandfather Jehaan, spending their days collecting milk from someone's farm and selling it to the townspeople in Antwerp. Sometimes when he's free, he plays with his best and only friend, Alois, who comes from a wealthy family, but her dad isn't too keen on the idea of his daughter hanging out with a low class boy. His dream is to become a famous artist or painter, just like his favorite artist, Peter Paul Rubens. One day, when Nello was young, he and his grandfather found a dog nearly dead by the river, knowing it had been abused by its cruel owner. Taking pity on it, Jehaan and Nello take the dog Patrasche home and raise him as their own. At first, things are relatively happy and peaceful. But despite managing to get by on the wages they have, hardship winds up befalling Nello and his family one by one, and he wonders whether he can survive it all.

The Dog of Flanders was originally a small novella written by a British/French woman named Marie Louise de la Ramee, aka Ouida. You can read it for free on the Project Gutenberg website here, and it's very short, so it's easy to get through. Having read it myself, it's hard to say, but the book is actually rather flimsy. The stories hardly have anything to really tie them together, everything moves at a breakneck pace, the writing is rather sluggish, and the characters are completely one note, barely doing much of anything. Needless to say, Belgians didn't take to the novel, so Ouida's sentimental tearjerker wasn't very successful. However, the Japanese absolutely fell in love with it when a diplomat read the author's obituary, brought the book to his home country in 1908, and shared it with friends. It was quickly translated, and it became one of the most beloved foreign children's books in the entire country, to the point where it inspired four different anime adaptations, this one included. I've seen three: the 1975 anime series, the 1992 anime series, and this one, the 1997 movie, which was dubbed and brought to the US by Geneon in 2000. But if the original book is so flimsy, how come every anime adaptation, this one included, is not only so successful, but compelling, awesome, and masterful? I'm here to show you.

Firstly, the simple story makes it rife for adaptation, and Nippon Animation has proven to really be great at making use of their run time to add in lots of things to make what they work on more rich, compelling, and substantial, truly bringing out the best in its source material, starting with its characters. Every single one of them is amazing and well-developed, full of personality, and with their own defined roles, even if you don't like all of them. Just looking at them, you can figure out what kind of backgrounds they have, and the movie trusts you to be able to figure it out without feeling like it has to spoon-feed you with backstories and flashbacks, except only when absolutely necessary. They're all likeable and easy to get attached to, without a whole lot of unnecessary baggage and complicated backstory to sift through in the process.

Personally, I found the animation to be very good, though by today's standards it's rather dated. I don't really think so myself, as the character designs are simple but they give the animators the freedom in communicating the characters' happiest and most desperate moments, and here, it works effectively. The backgrounds are highly detailed, looking like they came right out of photographs in some cases, and the character designs are plain but serviceable, faithful to the time period it takes place in. Plus, you have to admit, they're much more polished and realistic than the overly cartoony 1975 designs, though the movie does use that as a base, and is basically a compressed adaptation of that. The music is pretty nice too. I consider the OST to be one of my favorite soundtracks ever, though some other series managed to do better. I think now is a good time to talk about the English dub for this movie. When it comes to the voices and casting, I think I prefer the English dubbed version over the Japanese because some of them sound a bit shaky, like Mrs. Nulette. In the Japanese version she sounds like she has strep throat. Jehan sounded like he had a sinus infection. The only Japanese voices I liked in the movie were Alois, George, and Paul. They were perfect. But I hear that the Japanese version has scenes that were cut out of the dub, so in respect to that, I'll prefer the Japanese over the English version. But I feel the English dub is great, with all of the actors nailing their roles perfectly, and not a single line sounded stilted or badly dubbed. To me, this is the Cowboy Bebop of English movie dubs for me. Yeah, I said that. Fight me.

Despite the slightly old visuals and slightly shaky Japanese voice acting, these should be NO reasons to NOT watch this adorable, beautiful, heartbreaking, and awesome movie! This movie shows that life is fragile and not eternal, and it deals with serious issues such as death, poverty, and classism. It also emphasizes the benefits of honesty, friendship, work ethic, creativity, and knowledge, and how the ignorance of various people's actions and thoughts can really shape the person. All of you MUST see this wonderful movie! I would love to own it myself, but it's both out of print and appallingly expensive! It's the best movie I ever saw, and the best movie ever made! If you're interested in watching it, you can find the English version here. This is a movie that you NEED to see if you want to watch something that's genuinely good.
Collapse