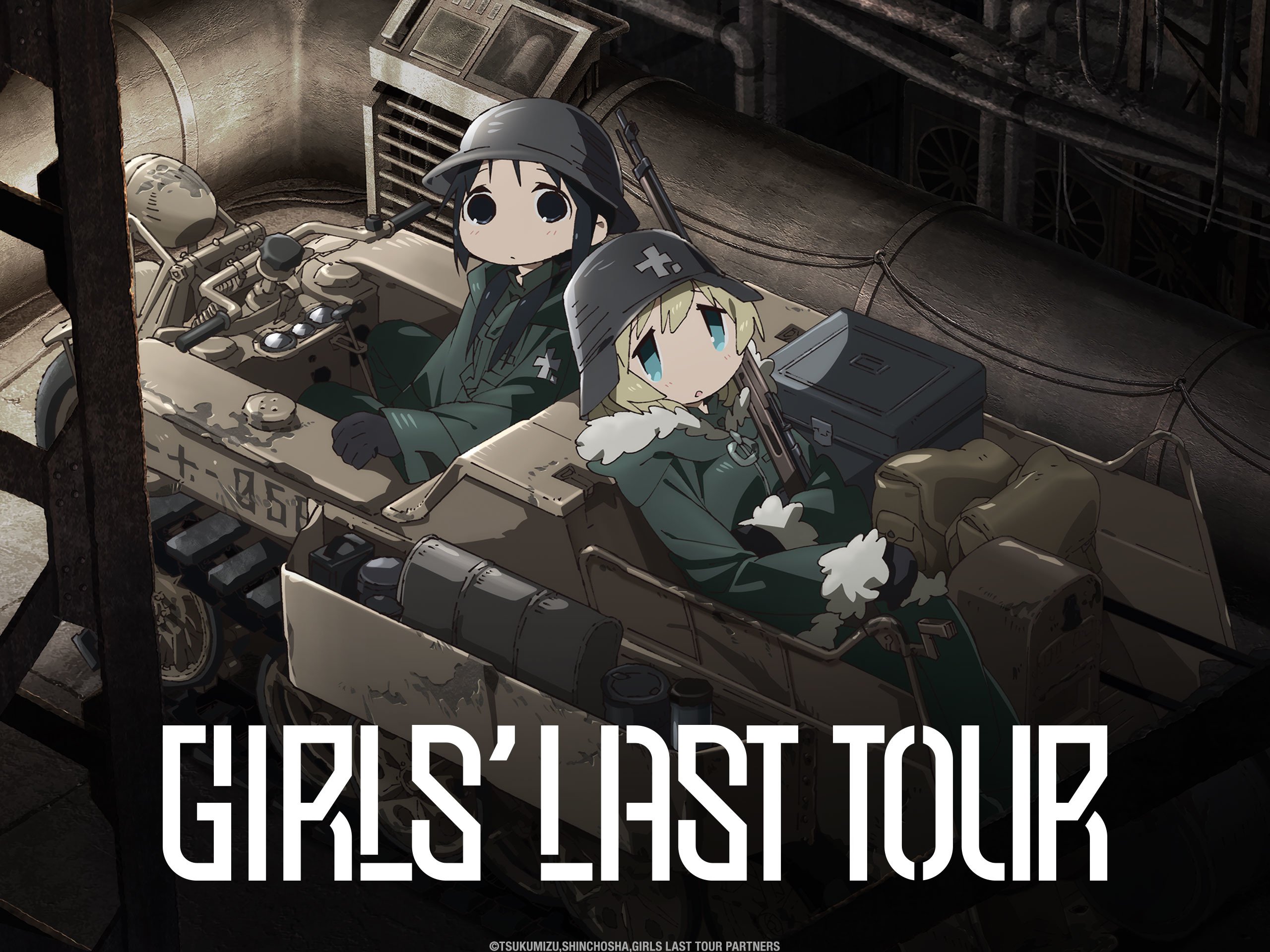 I give this dark but oddly soothing post-apocalyptic anime...an 87/100!

Moe anime tend to get a bad reputation, and for good reason. Most anime that try to make their characters look and act as cute and childish and innocent as possible tend to place more emphasis on cuteness over things like substance, storytelling, and, y'know, character development. But over the past couple years, that trend seems to be changing, and manga/anime creators seem to be making an effort to write genuinely good moe anime, with such examples being Non Non Biyori, Laid Back Camp, Made In Abyss, and the subject of today's review, Girls' Last Tour. Not gonna lie, I had never even HEARD of Girls Last Tour before late 2017, but a blog I follow was praising the first episode of the anime up the wazoo. Curious, I decided to check the anime out, and while it didn't necessarily blow me away, I found myself really liking it. Seriously, what anime can you think of that has cute moeblob girls exploring a barren, post-apocalyptic world where humanity is pretty much extinct and resources are extremely scarce? Then again, this is Japan, and they've made crazier stuff than this. The premise is pretty simple: Two young women are traveling the world searching for food and shelter, learning a little about everything they come across, from abandoned buildings that were part of a bygone era, to sentient robots taking care of the only living fish in their world. Every day, they keep going, trying to find a little bit of happiness in their ruined land.

What makes Girls Last Tour stand out from most works set after an apocalypse is its use of minimalism. The anime doesn't rely on exposition fairy characters that spoon-feed you details about the world Chito and Yuuri live in in every scene. Instead, the background art and the setting speak for themselves. Giant, decrepit structures dominate the landscape, unstable and probably ready to crumble at the slightest touch. Industrial cities with multiple layers going all the way to the stars lay abandoned for possibly centuries. The anime doesn't tell us anything about the world Chito and Yuuri live in, and by making the girls know nothing about it themselves, it adds to the immersion in that they're just as confused about the state of their world as we are. They don't know how society works, nor anything about the technology save for what Chito has read in books. We get small details peppered across the anime in regards to what might have happened to their world, but nothing too concrete, and I think this approach works here. At this point, humanity is close to extinction, and knowing the answers doesn't change the current reality. The worldbuilding is really neat here, leaving a lot to the imagination, but offering just enough details so that we as an audience can fill in the blanks ourselves.

The animation itself is great, with minimal but fluid movement, and doing a good job at contrasting the girls' cutesy, blobby designs against dark, detailed backgrounds, but there's also great shot composition, editing, and mood setting, too. Dark environments are always cloaked in shadow, and even when the girls are outside, there isn't a whole lot of color, clearly emphasizing just how dead the world around them is. The CGI is pretty good as well, restricted to only machines and occasionally far shots of the girls riding their Kettenkrad, and it makes the effort to integrate decently into the scenery. The music is great too, low key and atmospheric, fitting the show's grounded but upbeat tone, always knowing when to let the score kick in or when to use natural sounds, like rain hitting a hard surface, or the creaking of a broken pipe. I do think the show's opening and ending songs, while well sung, are a bit too perky and upbeat and clash against the show's tone and atmosphere. The insert song at the end of episode 5 is much better about this, thankfully.

Contrary to most anime, the show's cast of characters here is extremely small. There are only five named characters in the show, with Chito and Yuuri having the most screen time, being the main characters and all. They have starkly different personalities, with Yuuri being a dopey big eater but quick to adapt to her new surroundings, while Chito is level-headed and rational but timid and a bit pessimistic. They have different mindsets and approaches to life as a whole, which the show uses to great effect. All throughout the show, we get to follow this duo through their travels and see what makes them tick, their strengths and flaws, and everything that makes them them, so the bond and chemistry they share is believable, with the last episode developing it further into a satisfying payoff. While they do often times ask philosophical questions and ponder and theorize about the world around them, as they know nothing of how their society works due to it being...well, dead, they frequently point out the flaws of certain concepts in short, blunt sentences, with any pretense of deeper meaning tossed out the window because the show regards it as filler and not important to the main narrative, which is Chi and Yuu living day to day and trying to make the most out of their travels.

One would think that a dark moe anime would turn out to be a complete disaster, but in the right hands, it can work quite well, and I think Girls Last Tour pulled it off, even with nothing at stake or any overarching conflict. The show never felt boring or repetitive to me, and the chemistry between the main girls is strong enough to carry the whole show from beginning to end. One person I know described it as being both depressing and comforting at the same time, a rare show that is uniquely charming while keeping its feet firmly on the ground, and I couldn't have said it better myself. The manga recently ended, and I need to finish my review for that one, but if you want to watch a plain nice show and relax, give Girls Last Tour a try. It's nothing groundbreaking, but it's the kind of show that deserves more love than it gets.
Collapse