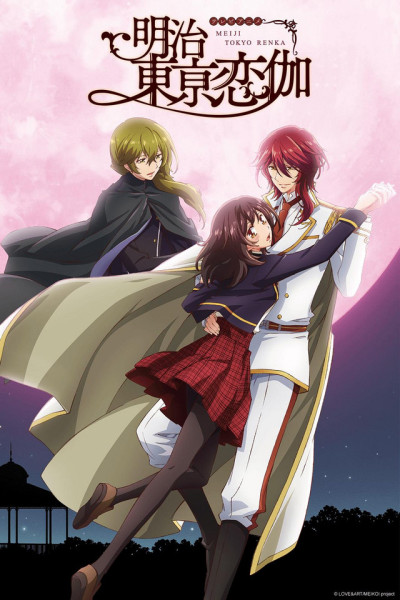 Years ago, when I was first dipping my toes into the anime fandom back in, say, 2005, I watched an old anime called Harukanaru Toki no Naka de, which centered around a girl and her friends being sent back in time to Japan's Heian Era. I thought it was the bee's knees, and before Shounen Onmyouji came out, I considered it my favorite anime of all time. I later learned it was based on a video game, and a specific type of video game called an otome game. Otome games are typically visual novels aimed at women, where the main character, usually a girl, is meant to develop a romantic relationship with one of many male characters. These kinds of games don't usually come to the US, especially their anime adaptations, partly because they tend to be poor quality, and because many of the games and their anime adaptations depict the main girl character as little more than a self-insert, or submissive, doll-like, spineless, weak, and overly dependent (Amnesia and Diabolik Lovers, anyone?), among other reasons mentioned in this article here. Because Americans like myself tend to favor female characters who have more dynamic personalities and are more independent and outspoken, otome games don't really have much staying power in the US. Thankfully, not every otoge nor anime adaptation has this problem, as the subject of today's review, Meiji Tokyo Renka, is one of the exceptions in regards to the quality of its anime adaptation, though even it has its own sets of problems.

Based on the 2011 mobile game by the company Mages, which later became a PSP and PS Vita game, the anime centers on Mei Ayazuki, a young girl who's been able to see spirits since she was a kid. This has left her ostracized because normal girls can't see ghosts or spirits. One night, when there's a crimson full moon, she meets a magician, Charlie, who invites her to participate in a magic trick...only to find herself sent back in time to Japan's Meiji Era. She is taken in by the dashing writer and army surgeon Ougai Mori and meets a variety of other historical figures, from Ougai's art protege Shunso Hishida, to Shinsengumi general turned military police sargeant Goro Fujita, to young germaphobic dog-hating playwright Kyoka Izumi. She turns out to be a tamayori, or someone who can see spirits, and they ask her to help them with a variety of spirit related problems, from chasing black cats to helping distressed spirits pass on. While Mei does want to go back to her time, she does find herself drawn to her new acquaintances and finds herself more comfortable in this time period. Will she choose to say, or leave the past behind and return home?

First thing's first: Not gonna lie, the animation is kinda cheap. I guess you could say I'm biased because I've seen shows that had better animation than Meiji, but it's easy to tell that the show spent most of its budget on the guys and making them look pretty than actual motion and detail. I mean, the animation isn't really bad, but there are a lot of animation shortcuts taken in certain places, and other times, the camera focuses too much on facial close-ups and still shots, like the animators couldn't actually animate characters moving when they really need to. Some faces go off model and get too long or rounded, and there are times when the characters' clothes swaying in the wind look stiff and just flap up and down at times. Episode 11 is a pretty big offender in this department. But for all I know, maybe the animation errors got fixed for the Blu-Ray version. For what it's worth, the music is much better. It's still kinda saccharine, with classical pieces meant to convey the romance and thrill of being in a new time period surrounded by a plethora of pretty boys, but it does its job decently enough. I do love the opening and ending songs being jazz-inspired and making great use of trumpets and horns. You don't really hear those used in a lot of anime unless it's Sound Euphonium, and unlike another reverse harem anime I saw recently, Bonjour: Sweet Love Patisserie, the singers can actually sing and actually don't sound like they're phoning it in every time they open their mouth. Also, in episode 6, there's an adorable little rap that goes on about the benefits of electricity, and even though it's kinda cheesy and ridiculous, I watch that segment every day because it always puts a smile on my face due to how cute it is, both in Japanese and English.

The characters are rather mixed, but I'll start by talking about the best part of the show: Mei. It's an all too common problem for female protags, especially in otome games, to have all the personality of a wet paper towel, whose sole purpose is to swoon over guys, be ordered/pushed around by everyone, and be someone the players/audience can insert themselves into. I can assure you right now that Mei is not one of those protagonists, even though the first episode does have her start out that way at first. After a couple episodes, she's actually allowed to have a God damn personality! She's cheerful, proactive, and helpful, but not to the ridiculous saccharine degree that most kids shows try to shove down your throat non-stop (Megumi from Happiness Charge Precure is a big offender in this). She's kind and caring, but her impulsiveness does get her into trouble sometimes, and she never gives up even when things get tough. She does occasionally swoon over the guys, but she's a teenage girl, and considering how most otoge protags are portrayed, I'm willing to let it slide here since she's actually allowed to have a character and personality! Also, I highly recommend you watch the English dub for the show, because Madeleine Morris as Mei is absolutely adorable and gives her even more charm! While she isn't the most three-dimensional character ever, the fact that she's even allowed to have a personality and character development at all, as small as it is, makes her leagues better than other otome game protags who have no character or personality at all.

Unfortunately, I don't find myself singing the same praises for the pretty boy gallery. They all pretty much fulfill typical bishounen archetypes: The confident one, the snarker, the peppy nice guy, the no-nonsense badass who'll beat you up if you look at him wrong, so on and so forth. All of them suddenly start fawning over Mei over the littlest things. Helping you around the house? Insta-love! Giving you some words of encouragement? Insta-love! Yeah, I think you can see how stupid this is. While they all do get some time in the limelight (Except for one light blue haired guy who, despite being in the opening, appears twice and doesn't do anything at all! Why even shove him in there if you're not even gonna do anything with him?!), any development they get is either cliche or really rushed. For the latter case, Goro, the teal haired police officer with the sword, is especially hit hard with this, because he's firmly established as a no-nonsense, badass warrior who hates ghosts and wants to kill them all and is always annoyed with other peoples' antics. His episode keeps this characterization, but near the end, out of freaking nowhere, he suddenly goes out of character and decides he likes Mei, with no build-up and with absolutely nothing establishing how he even decided to change his view of her in the first place, so his sudden change in personality comes way out of the left field. I suppose one reason for this is because the anime only has 12 episodes, so it needed to work under those constraints, but I've seen lots of anime have more organic characterization that knew how to properly build up to it in that same amount of episodes and less! Having a character just randomly go from one personality to another without any good reason just seems lazy. Trust me, having seen The Last Unicorn, which was a pretty big offender in that aspect, that's saying a lot. Also, there are some subplots regarding some characters that could have benefited from being better utilized for character development, but instead just get shoved to the side once Mei gives them an inspirational speech and it's never touched on again, which is what happens with Shunso in episode 11. So yeah, when it comes to anyone who's not Mei, characterization is not one of the show's strong suits.

So I wouldn't consider this one of the best anime ever made. It's characterization issues, lackadaisical handling of certain subplots, refusal to address certain things that could pose great opportunities for character development, and adherence to typical reverse harem tropes prevent it from breaking any new ground or reaching lofty heights. But as far as anime adaptations for otome games go, I think Meiji Tokyo Renka is the best you're gonna get, especially if you want to follow a lead girl character who actually has a personality and isn't a submissive little doormat the audience can insert themselves into. It's cliche, but mostly harmless, and makes for pretty good popcorn entertainment. Hey, sometimes even female otaku want to have their cake and eat it too, and I'll gladly watch this over the millions of dumb ecchi and slavery-endorsing isekai shows any day of the week.

Oh, and in case anyone's wondering: Kyoka is my best boy. Fight me. Speaking of which, hey FUNimation! Can you please license the two Meiji Tokyo Renka movies that came out before this did? They deserve a Blu-Ray release! They're not even subbed, for God's sake! Let Kyoka fans have their Kyoka movies!
Collapse