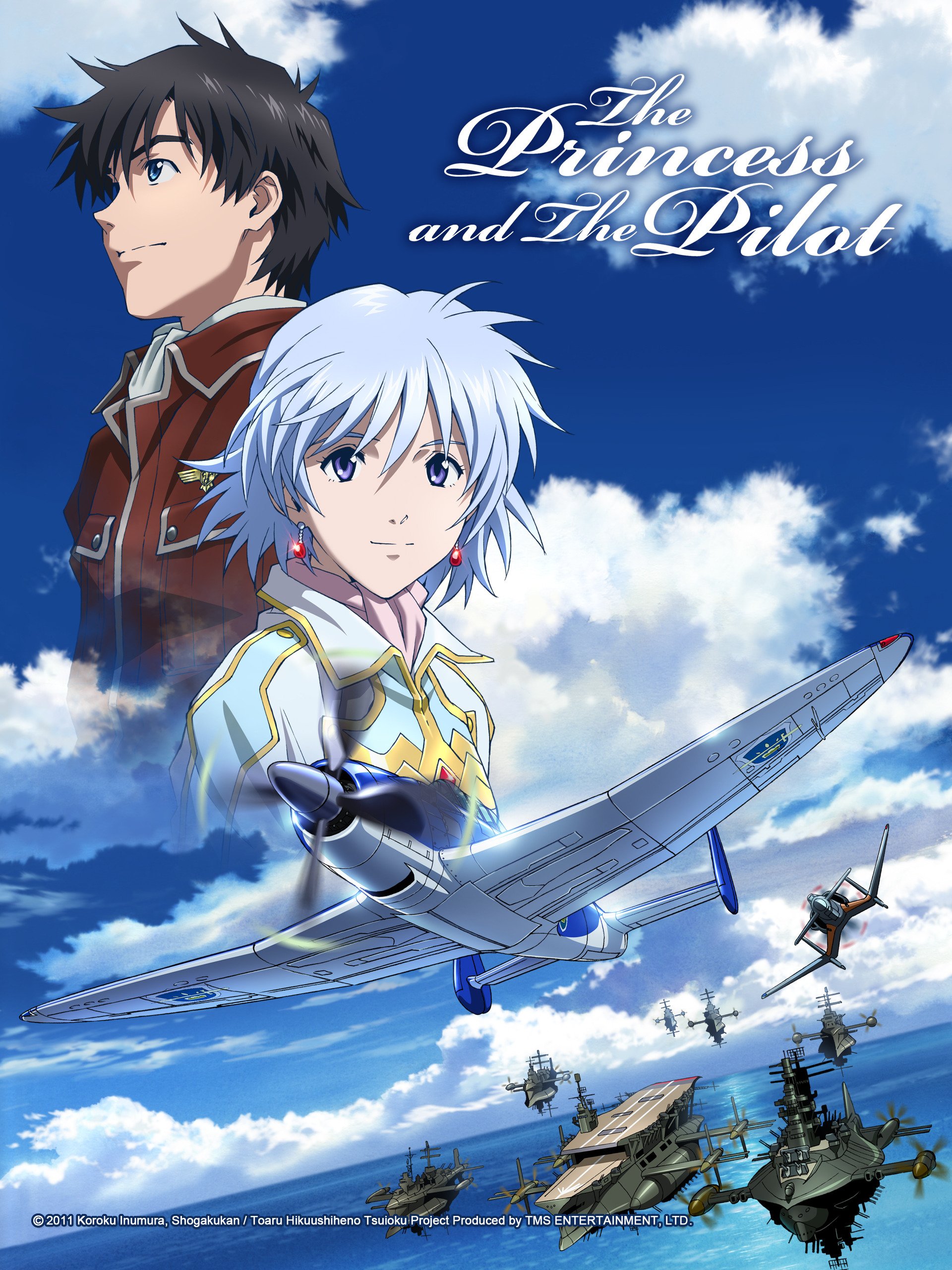 When it comes to movies, one of the biggest problems they suffer from is trying to be too epic. That's not to say movies can't be epic, and thinking big is a great way to make a conflict interesting. But some stories don't have any business trying to do that or go in that direction. But there are some movies that perfectly understand this, managing to strike the perfect balance between its story, characters, and conflict, knowing what to focus on and what isn't important. The Princess and the Pilot, or its Japanese title, To Aru Hikuushi e no Tsuioku, translated as Recollections of a Certain Pilot, flew under the radar when it first aired in 2011. I didn't watch it when it first came out because I thought it was a spin-off title from the Certain Magical Index franchise, and I avoided the Index shows like the plague back then, and still do because of the way their Japanese titles were so similar. I didn't find out that Princess and the Pilot had no connection to the Index series until much later, and only now did I decide to sit down and watch it. I must say, I'm quite surprised at just how good and candid this movie is in how it manages to avoid a lot of cliches that are so typical of movies with similar premises.

In an unnamed fantasy world, two warring kingdoms, the Levamme Empire and the Amatsukami Imperium have been fighting amongst themselves for years. In the midst of this struggle, the prince of the Levamme Empire, Carlo, declares his love for the princess Juana del Moral and vows to end the war in one year, as part of his marriage proposal. When the Amatsukami catch wind of this, they assault the del Moral residence, targeting Juana's life. As a last ditch effort to bring the prince his bride, the San Maltilia Airforce hires a mercenary of mixed blood—a bestado—to fly Juana to the Levamme capital in secret. The pilot, Charles Karino, accepts the mission...but traversing an ocean alone, into enemy territory, proves a much more dangerous ordeal than anyone could have anticipated.

The thing about Princess and the Pilot is that it's mainly a story about an escort mission, and makes that its main focus from beginning to end. There are other things going on in the background, such as the war and all that comes with it, but that's more used as a setpiece for the main story rather than the main story or even a subplot. While it would be nice to learn more about the movie's setting and have answers to the questions the movie raises, the movie smartly doesn't attempt to resolve everything in its timeframe. Because the movie keeps its focus strictly on the escort mission, it feels smooth and linear rather than bloated and like it's trying to juggle so many plotlines at once. Plus, there's very little action or fighting in the show, especially for a movie about a war, and the very few fights that are in there are not only well animated and well directed. Basically, while some may argue that it'd be better if it tried to resolve things and answer a lot of its lingering questions, the movie still manages to make great use of its time.

Also, the animation is sumptuous. The characters, barring a select few, all have realistic designs that never go too anime-esque, the various settings and towns all have their own unique look, the animation is reasonably fluid and full of colorful, detailed backgrounds, and even the CGI integrates surprisingly well with the 2D animation. Granted, most of the CGI is just limited to the planes, but they still look so seamless against the 2D skies and clouds. I don't really have much to say on the soundtrack, as I didn't find it very memorable, but it wasn't bad either. The OST did its job and is a solid effort.

Because the movie firmly focuses on the escort mission, the two main characters take the center stage, and while they're not exactly the most fleshed out or three dimensional characters ever, I still found them to be a pretty likeable duo. The movie just lets Charles and Juana play off each other whenever they interact, behaving like believable adults and have a good amount of personality that builds on the chemistry they develop together. I also appreciate that the creators made the effort to have Juana be useful and proactive when the situation calls for it, even though she's not well versed in things like combat or aerial training. Women don't necessarily need to be super badass actions girls in order to be a fully fleshed out character, and it helps that the movie is subtle in the way it presents the characters and their personalities on screen. Because Charles and Juana are the main focus and spend a good amount of time together, they work really well together. While some may argue that the romantic bits they share are rather cheesy and sappy, and I do agree with their points, I also found those bits to be well executed, because they still manage to avoid some of the typical trappings that most romance scenes in anime tend to fall into, such as realizing that realistically, they can't be together because they're just two people in two very different kingdoms and social classes, and subtling indicating with few words that acting on their whims won't do anything for them.

I unfortunately can't say the same for the supporting cast. Other than Charles and Juana, none of the other characters are given the same treatment, and all of them, especially some stereotypically evil nobles who crap on Charles because of his interracial origins, are completely forgetable or still conforming to cliche stereotypes. The bad guys especially are too stereotypically mean spirited and cartoonish for their own good, which makes the discrimination subplot come off as completely one-sided and lacking in any real depth. I already talked about how the movie doesn't answer a lot of questions in regards to the setting and some characters' actions, so I won't belabor the point on that one (Apparently, according to some supplementary materials in NIS America's Premium release of the movie, the director deliberately decided not to delve deeper into the movie's setting or spell things out because that's how he prefers movies to be). But the final problem I have is the voice actors' lackluster acting for Charles and Juana. Charles' voice actor, Ryunosuke Kamiki, is okay and does a solid job overall...except the parts where he screams. Seriously, he can't carry a high note for the life of him. But the biggest offender is Juana's voice actress, Seika Taketomi, who is really only known for on-screen acting...and it shows. Her voice makes her sound too young for Juana's age, and oftentimes, she sounds like she's trying too hard to make Juana sound high pitched, and during important scenes where she's supposed to sound genuinely angry, she just sounds pouty and petulant.

For those who want to watch it, you're in luck. The Princess and the Pilot is available on streaming platforms such as Amazon Prime and a new one called Retrocrush (That site is free, so you don't need to pay anything to watch it), and NIS America's Blu-Ray is still readily available if you live in the US, though the premium edition is now out of print. It has no English dub, sadly, and if NIS America's license for it lapses, I'm kinda hoping maybe GKids or Eleven Arts can license it and give it an English dub, as they're pretty good about that with anime movies. While the setting begs for further elaboration, barring some lackluster acting from the main leads and some cheesy romance scenes, The Princess and the Pilot is still a very good, solid movie that has a lot to like and seriously needs more love, and the things it does well, it does really well, and is a nice little romp if you're tired of the usual action-y fare that most mainstream movies tend to offer.

The Barnes and Noble in my area is reopening tomorrow!! Wahoo!! Books and manga, here I come!!
Collapse