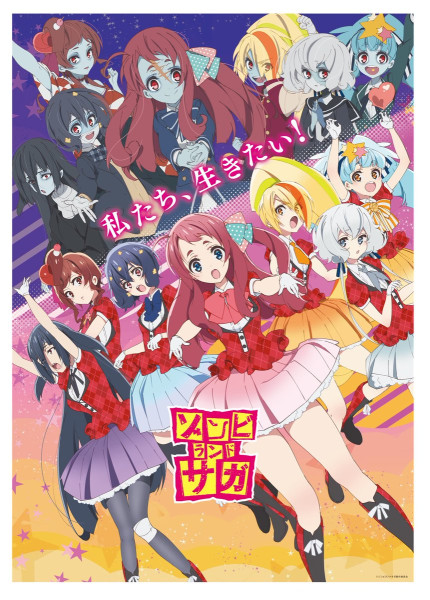 Oh, zombies. They've been a staple in horror movies ever since horror movies started utilizing them. Some zombie related stuff is good in the right hands, and others...not so much. But let me ask you: Who in their right mind had the idea to come up with an anime about cute zombie girls becoming idol singers, and having it be a wacky, colorful, comedic satire on idol culture? Oh right, this is Japan. They pretty much allow anything to be made into an anime. If they can come up with anime about things like runaway hospital beds, cute girls peacefully living out the end of the world, or sentient sardines that wish for death, then zombie idols being cute really shouldn't be that surprising. Ironically, the people who made this anime didn't think it would do very well, and lo and behold, it wound up becoming the darling of the autumn 2018 anime season. But how did this random anime even come about, and why is it even so popular? Most idol anime tend to be either saccharine, melodramatic, or of general poor quality. Well, let's dig some graves and find some answers. May we all rest in hell.

In the year 2008, a young high school girl, Sakura Minamoto, is determined to become an idol. After gathering some application paperwork, she races out the door to make her dreams come true...only to find herself meeting the business end of a speeding truck and dies from the impact. But this is not the end. She wakes up to find herself in a creepy, abandoned mansion in Saga Prefecture inhabited by zombies. Terrified, she runs away and tries to find some answers...only to find out that she too is a zombie, and that ten years have passed since she died. A mysterious man named Kotaro Tatsumi resurrected her and six others girls from different eras, intent on turning them into popular idols for the purpose of saving Saga Prefecture from falling into obscurity. This can either go really well or fail miserably, especially since Kotaro spends a lot of his time yelling at them and not even bothering to explain anything to them.

When the anime was first announced, no real premise was revealed for it, as its plot was kept very tightly under wraps until its airing. Many thought it was just going to be a cute girls meet zombies kind of show, like School-Live, so imagine their surprise when they found out it was going to be about cute zombie girls becoming idol singers. It came out of the gate with guns blazing, complete with luscious, wacky, fluid animation that bursts with color and charm. Yeah, I gotta say, the animation for this one is sublime. The colors are bright, the character movement is fluid, and the many visual gags always manage to pack a glorious punch with great comedic timing. It also manages to switch between cute and scary almost seamlessly when it wants to. The only real negative thing I can say about it is that it uses really clunky CGI during the idol segments. Not all the time, but they're jarring enough to know that you're watching 3D models instead of 2D animation, and the transition there isn't the smoothest. Sorry, Zombieland, but Dragon Quest: Your Story and the later seasons of Aikatsu raised my standards for Japanese CGI, thanks. (I still haven't seen Land of the Lustrous yet, but I do plan to!)

However, the show is very versatile in the music department. Seriously, the soundtrack for this show is all over the place. Death metal, J-pop, rap/hip-hop, jazz, Zombieland Saga serves a whole buffet of music genres, whether it be singing or the background music. The opening is wacky, bold, colorful, full of rapid movement, and is downright silly in the best way possible, while the ending song is a low key, somber, heartwrenching ballad. I honestly didn't find a single song that I didn't like, even the idol songs (Though I did feel the song To My Dearest was sung way too fast in its beginning verses), and the background music was also very well done. so the soundtrack hit a solid home run here. Also, zombie girl rap battle. How can you go wrong with that?!

But again, you can't have a story without good characters to back it up, and while I don't feel these zombie girls are as fleshed out as others in other anime I've seen, I love the whole ensemble, and they have subtle layers to them that help keep them from coming off as just simple archetypes. Sakura's enthusiastic and upbeat, but she's not a ditz nor a pushover. Saki is a badass, trash talking biker chick who's a complete degenerate and stays that way, but isn't a complete bitch either (I also appreciate that the anime doesn't try to change her into a girly girl and lets her stay a degenerate biker gal), Junko's a shy girl who's not fond of how drastically the idol industry changed from her time period, but isn't so shy that she doesn't want to perform in her own way, as she justs wants to enforce clear boundaries. I also love that the anime treats its characters and their personal boundaries with far more respect than other shows I've seen (Take note, episode 6 of 22/7!), something that is sorely needed, especially with how competitive and cut throat the idol industry in itself can be. That being said, the only ones who don't get much development are Yugiri and Tae, whose backstories are unknown as of this season, and Kotaro...not gonna lie, I'm not the biggest fan of him. I mean, it's funny when he's hammy and silly, but he's also kind of an abusive jackass who constantly treats most of the girls like crap and puts them down over the slightest provocation (especially Sakura) and never explains anything to them, especially how he resurrected them as zombies to begin with. But the show knows he's a jackass and he always gets his whenever he sets the girls off, especially Saki and Ai, who don't hesitate to put the guy in his place when he treats them like shit.

Speaking of not explaining things, the anime has a lot of neat ideas and concepts, but with its short length, it leaves a lot of questions unanswered. How did the girls even become zombies? What is Kotaro really planning on doing with them? Will people make the connection and see that the girls were actually people who died in varying time periods? One person recognized Lily, so the possibility is there. Also, what's the deal with Yugiri and Tae? Or even Kotaro, for that matter? Not only that, the final episode doesn't really end the series, so much as teases the audience with a hook for a potential second season. Thankfully, a second season has been confirmed, so for all we know, we might finally get answers if and when that airs. Still, some might not be satisfied, and that's okay.

With an anime that relies on two main gimmicks, zombies and idols, one would think meshing the two would be a complete disaster. But surprisingly enough, Zombieland Saga actually managed to make it work. True, the fact that the girls are zombies become less and less relevant as the series goes on, and Zombieland Saga does play some idol tropes and scenarios completely straight even when it's parodying or satirizing them. But I never felt like Zombieland Saga was trying to paint a rosy, overly saccharine picture of the idol industry, and it does acknowledge that being an idol is, at its core, a job, a business selling you a product, even if the most it digs its claws into is tongue-in-cheek jabs at it. It doesn't try to do a full take-down of the industry like Wake Up Girls did, nor does it paint the industry as being all sunshine and rainbows like Love Live consistently tries to do. I actually did watch the first episode of Love Live and I absolutely hated it, because it was basically overly syrupy Disney fare that was bland, generic, childish, overly pandering, and tried to paint a way too rosy, syrupy picture of how the idol industry works. As a result of how it tackles the idol industry and all that it entails, any drama that comes up in Zombieland actually feels more earnest and substantial than most idol shows try to do, without ever coming across as shallow or melodramatic. Basically, Zombieland Saga uses its bizarre, off-the-wall premise to present its messages with earnest sincerity and just tells it like it is, pulling the wool from your eyes but not trying to outright trick you or throw you a curveball.

I think the show is okay with how it currently is, just a fun, wacky, biting but loving satire of the idol industry that's full of heart. It won't be for everyone, but this show is a fun, wild ride all the way through, and I'm eagerly looking forward to the second season when it comes out!
Collapse