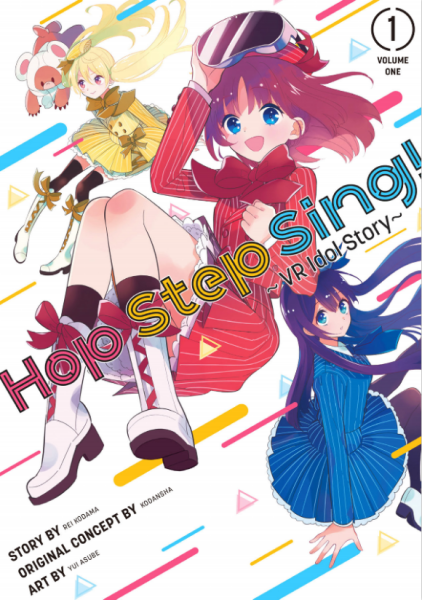 Media about Japanese idol singers are about as commonplace as seeing candy in a convenience store. In particular, anime and manga about them have been around since the eighties, and the idol craze doesn't seem to be dying down any time soon. But out in the West, idol anime don't exactly get the best reputation, mostly because they come across as generic or have little to no substance to them. Many of them just rehash the same premises over and over again, with very few daring to try anything new with them. There are some exceptions, key word being some, but many of them are just there to either promote real life idols or are little more than cash grabs for multimedia franchises trying to make a quick buck. But there are hidden gems to be found, and one idol manga that I've come across, Hop Step Sing, actually manages to stand above a lot of the more generic idol fare and try something new.

Middle schooler Niina Nijikawa loves idols and singing, but she gets terrible stage fright when in front of an audience, mainly due to being told she's way too loud, so she thinks that dream is dead before she can even fulfill it. But when a new friend introduces her to virtual reality and all it has to offer, she thinks she found the solution to her problem: Why not become a VR idol? She can sing in front of an audience without actually being in front of them herself! Joining her in her endeavor are polite rich girl Shikiri Shiishiba and bossy, arrogant shut-in Mikasa Minowa. Together, the three of them become the VR idol group Hop Step Sing! But the trio have to face one adversary after another if they have even a chance of making it into the idol scene.

The manga is based on a set of actual VR music videos that are actually available on Steam. Don't worry, you don't need to have played the games to understand or enjoy the manga, as it pretty much acts as an origin story for the group in question. Plus, with the manga, you don't have to worry about weird CGI either. The manga's artwork is pretty nice. Not as details as others I've seen, but it does its job decently well, and parts of it remind me of a straight shoujo manga, like the characters' big, sparkly eyes, the cute outfits they wear, and the themes of overcoming adversity through friendship and working hard. The scenery during the VR segments are especially well drawn, and it's made clear that the artist had quite a bit of fun experimenting with the more detailed backgrounds whenever the occasion calls for it.

Of course, you can't have a story without characters to follow. Admittedly, they do start off adhering to some typical anime archetypes, like the shy girl, the polite rich girl, and the arrogant little brat, but even over the course of the manga's short run time, the series never forgets to give them some degree of depth and character development that fit their character arcs, even if the transition isn't always the most smooth for one character in particular (Mikasa). I definitely liked this little trio a lot more than I do characters in certain other idol anime I've seen or heard about, that's for sure, and it's rare for idol series to make me genuinely care about their characters and stories. The shy girls doesn't always get to be main characters in idol media, as that's usually reserved for the more peppy, cheerful characters. But the biggest strength the manga has to offer is its usage of VR technology and how the characters make use of it to achieve idolhood and overcome their own insecurities. It's not something that most idol media have tried to use, and the way Hop Step Sing incorporates it into its story definitely makes for a lot of interesting ideas and scenarios that it manages to utilize perfectly, making it stand out among the millions of other idol media that rely too much on the same generic premises over and over again.

In terms of flaws, I can really only think of four:
1. Mikasa makes a VERY bad first impression when she first appears. She does get better as a character later on, but I don't blame you at all if you decided to drop the manga because of her alone.
2. Many of the side characters don't receive as much screentime or development as they should, so they wind up coming across as one-note.
3. The manga doesn't really have the girls face any real adversaries or actually experience the more problematic aspects of the idol industry. Several subplots imply that they likely will, but they all either wind up never happening or just pushed to the wayside, never mentioned again, and everything that happens to the girls winds up going swimmingly for them in the end.
4. ITS TOO DAMN SHORT!!! By short, I mean this manga only has three volumes, that's it. The story has so much potential and I really wanted to read more of this and see these characters grow!

If you want to own this manga, it unfortunately doesn't have physical copies made available, as it's digital only. If Kodansha USA ever decides to put out paperbacks of this, I'm buying the whole series again in a heartbeat, because I think this manga is genuinely good and deserves more love and appreciation than it gets! But I know this won't appeal to everyone, especially anime fans who are utterly sick of idols being shoehorned into everything, and I can understand where they're coming from. But if you just want a short, light read that does something new with the idol formula and is full of heart rather than cheese, definitely give Hop Step Sing a try if you can.
Collapse