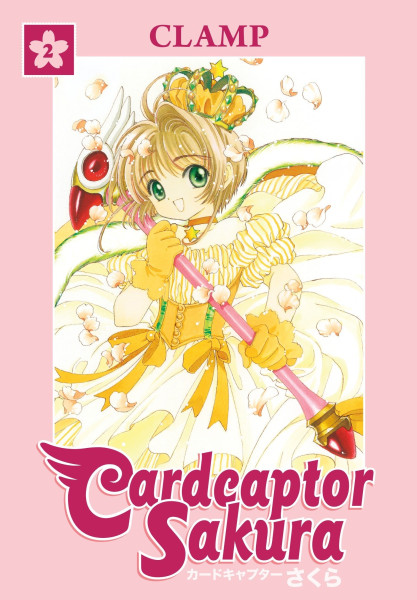 Unlike most anime fans I know of, I never grew up watching Cardcaptor Sakura. The English dubbed version of the anime, called Cardcaptors, did air when I was younger, but I stayed the hell away from it. Why? Because I saw one of the commercials and dismissed it as some babyish girly show where the characters would talk about nothing but fashion and boys, be petty and nasty to one another over stupid things, and assumed it was something like Bratz. Yeah, I admit, I was a pretty judgmental kid. To seven/eight year old me, nothing could beat Pokemon and Digimon in my eyes. Over the years, I started to warm up to the series upon learning more about it, even managing to finally watch the whole anime when I was in college, though I saw the movies before that, and even bought Tokyopop's release of the manga at my local bookstore. In fact, I still have those manga volumes on my shelf to this day, even after other companies put out newer, better prints of it with new translations and everything. Cardcaptor Sakura is considered one of the best children's anime of all time, and one of many manga that put CLAMP on the map in the anime fandom. It's easy to see why, and now, as an adult, I appreciate it a lot more than I did when I was younger. That being said, how does it hold up today in my eyes?

Sakura Kinomoto is a normal ten-year-old girl with a pretty easy life. One day, she finds a mysterious book in her basement, and upon opening it, a slew of magical tarot cards fly out, spreading all across the city. She also accidentally awakens one of the guardians of said book, Cerberus, aka Kero-chan. It turns out the cards she released are called Clow Cards, magical cards created by a famous magician, Clow Reed. Kero tells her that since she released the cards, she has to be the one to stop them from wreaking havoc on the world. With this, Sakura is christened as a cardcaptor, and with her loyal friends by her side, she's determined to collect all the Clow Cards.

Really, what is there to say about CLAMP's art that hasn't been said already? It's luscious and beautiful, and in this case, since CCS is a children's manga, they manage to make the kids look cute without bordering on overly saccharine. The linework is clean and sharp, the backgrounds are packed with detail, the character designs are great, and the fight scenes are all packed with action and effects that really make them pop. I do feel that sometimes the billowy costumes can be a little over the top though, making some panels and frames look busier than they should be. Also, having read Magic Knight Rayearth, which came out before CCS and had thicker lines, sharper eyes for the characters, and the character designs did make the characters have overly long, thin noodle limbs, CCS is noticeably an improvement on that front, with more realistic character designs and nicer looking eyes.

There's also no denying that CLAMP are masters of creating diverse, versatile, and likeable characters that immediately win you over with their charm. Every character, from the main leads to minor characters such as this one group of Sakura's school friends, are all given their time in the limelight, getting equal amounts of development and depth to them, really making the world the series takes place in come alive. One problem I had with Magic Knight Rayearth's manga is that it was moving at such a fast pace that it didn't bother to leave time to show what the characters were like outside of saving the world. CCS remedies that flaw impeccably, as the manga has 12 volumes, giving CLAMP plenty of freedom to balance out the more action packed chapters with ones where the characters just hang out and have fun. My favorite chapters were the ones where Sakura goes to the festival and gets the Glow card and one where she meets a nice old man. That being said, the manga is rather vague in regards to what Kaho Mizuki's deal is, and I wish more had been done with her. Anime fans are probably wondering "Where's Meiling?" Y'know, Syaoran's cousin in the anime. Technically, she doesn't exist in the manga. Meiling is a completely original character made solely for the anime, so she's nowhere to be found in the manga.

Given that this is, indeed, a children's series, CLAMP obviously can't indulge in some of their favorite tropes, like having the series just end with many questions unanswered, or a lot of the things they use in their more teenager-oriented works, such as more detailed violence. Of course, they're self-aware enough that they didn't try to dumb down the story they had for CCS. The premise is still child-friendly, but there's enough intrigue and depth to Sakura's card collecting quest that it never feels like the manga is insulting you for expecting something more from it, offering plenty of worldbuilding and backstory that manages to seamlessly fit into CCS's narrative. That being said, CCS isn't a perfect manga. Like I said earlier, I still think the manga should have done more with the character of Kaho Mizuki. Plus...there is one thing about the manga that might be a potential turn-off for a lot of people. CLAMP has a pretty accepting view of age-gap romances, even ones that would normally be considered creepy and unethical, like Sakura's mother, who married a teacher while she was a 16-year-old high school student (Japan considers 16 the legal age of marriage), with the most egregious one being one of Sakura's friends, a ten year old girl, crushing on a teacher who's in his thirties...and having said teacher actually reciprocate those feelings. Granted, nothing sexual or explicit happens, and the anime changed it to just a one sided crush on the girl's part, but anyone who really doesn't like seeing this stuff at all is going to have a hard time with it, and I honestly have to question why CLAMP put this in at all. Luckily, they seem to have realized how stupid and creepy this was, so when they made the sequel manga Clear Card years later, they cut the teacher character in question out of the story while also having Sakura's friend go to another school, downplaying her role in the story. So for me, while that particular element doesn't exactly sit right with me, I'm glad CLAMP didn't go further with it than they did, and I can at least take comfort in the fact that they addressed the issue later on, so kudos to them.

Overall, this is my more objective analysis of Cardcaptor Sakura as a manga series. But the thing is, one thing that makes me decide whether something will be one of my all-time favorites is whether it really resonates with me, blows me away, and hits me in the feels. So, I pose the question: Did Cardcaptor Sakura resonate with me, to the point that it becomes one of my favorite series? Sadly, the answer is no. This is not me saying CCS is a bad manga. It's very good, and I can absolutely see why it made the impact it did on not only magical girl anime, but anime as a whole. I like it, but I don't necessarily LOVE it, per se. It just didn't really add any extra spices to its storytelling and takes on various magical girl tropes. There are plenty of other anime and manga that I just happen to love a lot more. I guess I would have appreciated it more had I watched it as a kid, or even saw the uncut version earlier, but who can say? That being said, Cardcaptor Sakura is a great manga that I can wholly recommend to anyone looking for something sweet and heartwarming to read without it being too saccharine, and I think it absolutely earned its designation as a beloved classic, as it should.
Collapse