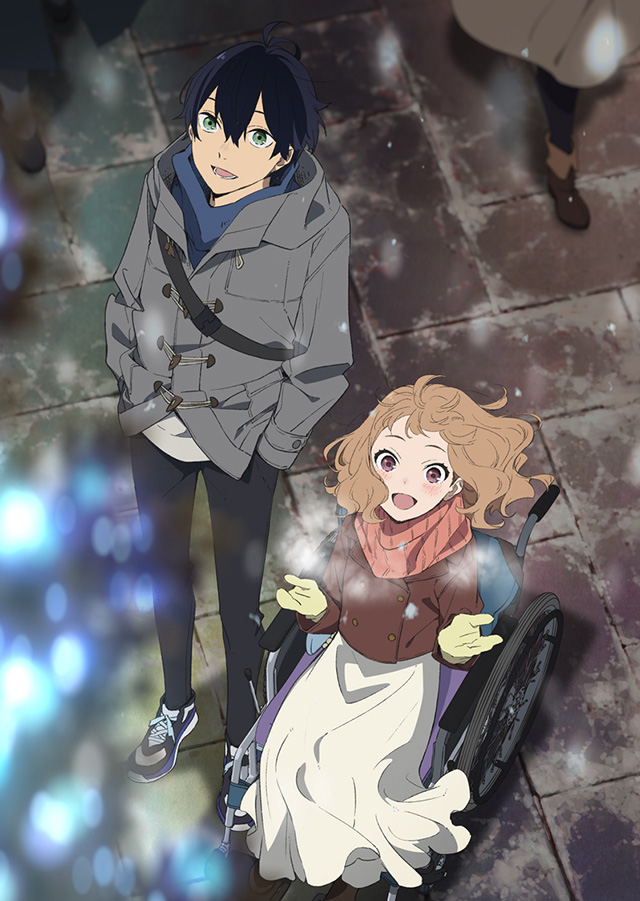 I give this movie about a girl in a wheelchair finding love and a purpose in life...an 81/100.

Media about disabled people are a dime a dozen these days, and their portrayals are equally varied. Some manage to portray the struggles of having a physical disability very well, while treating the disabled characters in question with respect, never reducing them to just their disabilities or making them into inspirational props. Others...not so much. There's plenty of movies, novels, shows, and games depicting people with disabilities and the lives they live with varying degrees of sensitivity, with Josee, The Tiger, and The Fish being yet another addition to that growing pile. Based on a 1985 short story by Seiko Tanabe, this isn't the first time Josee has been adapted into film. There was a live-action movie in 2003, which was the only movie adaptation until 2020, when not one, but two new films adapted it as well: This one, the only animated version, and a Korean live-action one, both released late in the same year. Guess it's gotten popular nowadays, hasn't it? I read about the 2003 movie, and have no interest in seeing that, as it contains some elements that really turn me off. Upon having heard that the anime movie doesn't have those particular elements, I decided to watch it. How do I like it? Let's find out!

The story centers on a young college student, Tsuneo Suzukawa, who works as a diver and dreams of going to Mexico to study oceanology. One day, he saves a disabled girl, Kumiko Yamamura, aka Josee, from her wheelchair going out of control. Their first meeting...doesn't go well, as she doesn't make the best first impression, but Josee's grandmother insists on hiring him to help Josee around the house when she's not around. The two find themselves growing closer, to the point where Tsuneo helps Josee get out of the house more, even though her grandmother wants to keep Josee confined to the house, thinking the world is all doom and gloom. But when tragedy strikes on both sides, Tsuneo and Josee find themselves at their own impasses, unsure of how they can keep moving forward.

One thing about adapting a slice-of-life story into an animated movie, as opposed to just using real people and actors and settings, is that animation allows people to do more with the material than the limitations of live-action can do, even though modern technology has helped the latter make new filming techniques possible in order to achieve certain things. I will say that the animation is very well done. The characters are expressive, the movement is smooth, and although the linework isn't all that polished, with a few empty spaces every now and again, it's much more subtle and harder to notice than, say, Granblue Fantasy season one, which had the same problem but that one was much more jarring and noticeable. The movie makes fantastic use of colors and fantastical sequences conveying the characters' thoughts and feelings. Even what little CGI it uses is well-integrated and blends almost seamlessly with the 2D animation. Good on Bones for making use of their good animation as always, as their productions are usually top notch. Not too big a fan of the soundtrack though. I mean, the background music is fine, though some pieces bordered on being kind of cheesy and making big, emotional moments come across as more melodramatic than necessary. The rest of it was okay, though the singer for the vocal songs...kind of needed to restrain himself at times.

I'm conflicted on the characters though. The main cast receive the appropriate amount of development, and their struggles are relatable and grounded. Tsuneo in particular stands out, as he isn't just yet another milquetoast male lead character with the personality of a slab of wood. He has a layered personality, a dream he wants to pursue, and we get a full look into his likes, dislikes, strengths, weaknesses, and what makes him tick. Josee is the same, and with Tsuneo offering to let her see the world outside her home, she gains the courage to push herself out of her comfort zone and sees that the world isn't all doom and gloom like her grandmother said it is, from how she presents herself to how she relates to other people outside of her grandmother and Tsuneo. The movie uses a lot of mermaids and ocean metaphors to reflect how Josee's disability affects her life, i.e. being a mermaid on dry land, and how she blossoms upon receiving proper support and accommodations. In that aspect, the movie really goes out of its way to show that people with physical disabilities deserve to be treated with respect, and can do things they want to do with the proper tools and support. That being said, there are times when Josee has moments where she's rendered helpless and needs immediate assistance, and some give it without her express permission (I don't use a wheelchair, but from what I've heard from others who do, touching someone's wheelchair or helping them without their permission for both is considered a big no-no), so as far as portraying Josee and her disability sensitively, I would stay it's above average: Doing a lot to treat Josee with some degree of respect and giving her some agency, but still stumbles on some ableist cliches on occasion.

However, my conflicting feelings for some of the characters come from the fact that the movie still relies on tired cliches in regards to the female characters. For one, Josee starts off as a real bitch in the beginning. Tsuneo saves her from her wheelchair going out of control, and how does she thank him? By biting his hand and accusing him of having groped her, which he never did!! On one hand, it is established that her grandmother is so overprotective of Josee that she not only tries to keep her confined to the house, but tries to convince her to react negatively to anyone that's outside her home. However, even with that, she continues to treat Tsuneo like crap when he's forced to help her out, at least until he manages to connect with her and help her in ways that'll actually benefit her. I'm not saying she needs to be some sort of saint or anything, as doing that contributes to plenty of other ableist tropes in and of itself, but would it have killed her to actually thank Tsuneo for all he did for her, or even apologize for how needlessly bitchy she was towards him in the beginning? Plus, the movie also plays the whole "Two girls hate each other because they like the same guy, and one of them is jealous and mean to the main character just because he's around her even for non-romantic reasons" cliche straight as a nail, and to be honest, I wish that trope would just die already. Granted, the character in question, Tsuneo's friend Mai, is slightly better executed in regards to how this trope is usually played out, even compared to the live-action movie, where their confrontation escalates into violence. But honestly, that whole trope is just a rotting corpse of a dead horse that really doesn't need to be rehashed yet again. Girls can be friends with the same guy without being constantly mean to one another, producers! This is also one reason that I don't find myself liking a lot of romance movies, as they play this trope a lot, and it's cliche, stupid, and even kind of sexist, because the guys are portrayed as more sensible than Josee and Mai are.

That being said, from what I heard, the producers for Josee, The Tiger, and The Fish deliberately set out to make their movie different from the live-action movie that came before it. I don't know how true this is, and I don't have any official sources confirming this, so do feel free to correct me if I'm wrong. I have no desire to see the 2003 movie, but from what I've read about it, it has elements that aren't present in the anime version, with the ending in particular being much more bittersweet and tragic. The final half of the anime version veers in a very different direction from the live-action one, even to the point of giving it a happier ending and changing a lot of things. I won't spoil things here, but I do appreciate the creators of the Josee anime for trying to do something different with the material they're adapting. Plus, now that the Josee novel has three different movie adaptations, all with different ways of telling the source novel's story, viewers can choose which adaptation they prefer from a wide selection, and you never feel like every iteration is exactly the same as the other one. As a movie, I like Josee, The Tiger, and The Fish for what it is and what it chose to do. And thank God they at least got rid of some of the creepier sexual elements the live-action one had! (And by that, I'm referring to a part where Josee mentions that she's forced to allow a man to sexually assault her in exchange for him taking out her trash. I'm so glad the anime got rid of that, along with making Mai less of a jealous harpy than her counterpart Kanae was in the 2003 movie) Also, I really wanted to see more of Josee and the librarian Kana getting along and being friends. Their interactions were the absolute best part of the movie, no cap!

It doesn't quite hit the landing, as it's held back by some tired cliches and the main character making a very bad first impression, but Josee, The Tiger, and The Fish is perfectly nice and serviceable if you want something nice and uplifting to watch. And now to wait for the upcoming English dub that FUNimation is going to put out in theaters next month.
Collapse