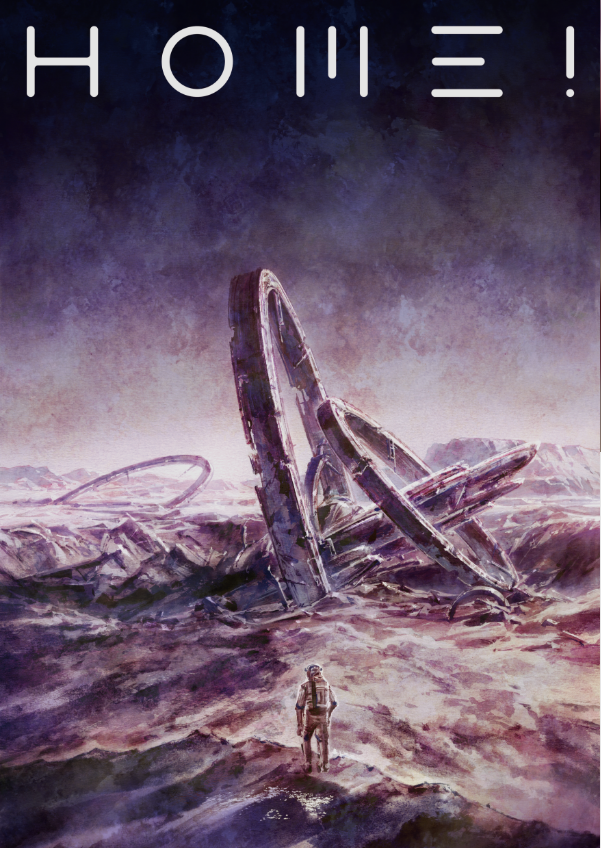 Home! is one of many short one-shot anime created as part of Japan's animator training projects. In the year 2124, a man named Christopher (whose name isn't mentioned in-universe) is on a research expedition in Mars, but comes across a crashed spaceship. Unfortunately, he discovers there are no survivors, only the skeletal remains of those who perished. He decides to take it upon himself to gather the remains of the dead and send them to Earth so their families can have some degree of closure. But when the ghost of a little girl tries to communicate with him, he is understandably freaked out, though the girl continues to try and reach out to him. This anime is only seven minutes long, so you can complete this without much trouble.

But if you're coming here looking for a fun time, this isn't it. Home! is very dark in its atmosphere and imagery. Skeletal remains, including those belonging to children, are shown without censorship, often with hair and clothes still stuck on them. The ghost girl is shown with several body parts missing, another reason why Christopher is so scared of her at first. Granted, it still has a fairly warm and hopeful outlook, as Home! ends on a bittersweet yet optimistic note. I liked the story okay, though I wish it had been explored more, since we don't know anything about what's going on, and the characters aren't even given names, with Christopher's being mentioned in plot summaries and never in-universe. I did find the ghost girl to be a bit annoying, and I don't really get why she never actually spoke. All she did was laugh and pull pranks on Christopher.

The animation was done by Studio Orange, which is responsible for primarily 3DCG anime such as Land of the Lustrous and Beastars. CGI doesn't always work in anime, especially when trying to make an entire anime in that style, but Orange has proven to be one of the few studios that actually cares about trying to make its CGI animation look good and not like weird jerky plastic robots, unlike, say, Polygon Pictures or the animators that worked on the abomination that is Ex-Arm. The human designs here are...okay, but they're kind of generic and don't really stand out in any way. It does help that this anime only has two characters shown on screen, so the mininalist cast does help them stand out to an extent. I don't have much to say on the soundtrack, as I found it kind of bland.

Unfortunately, the characters are where the short suffers. Because Home! is only seven minutes long, it doesn't have much time to develop them, and often times, Christopher seems to change his personality without much rhyme or reason. He starts off calm and rational, but the second he sees the ghost girl, he turns into a spineless screaming wimp, and then goes right back to his original personality when he's out of there. Granted, the reason he does this is understandable, but I feel like had the anime been longer and took more time to develop him, he'd feel more like an organic character. The ghost girl doesn't have this problem, but her only personality traits are being cheerful and mischievous, that's it. Most anime can develop characters and show their personalities through animation, without the need for dialogue, and most of them pull this off well. But Orange's character animation is still rather stiff, and I never really felt like they did much to bring the characters to life.

Eh, Home! isn't really anything special. I like what it tried to do, and it has potential, but in the end, it's just a generic sci-fi anime that doesn't really stand out. But it's a nice watch if you want to kill an extra five minutes.
Collapse