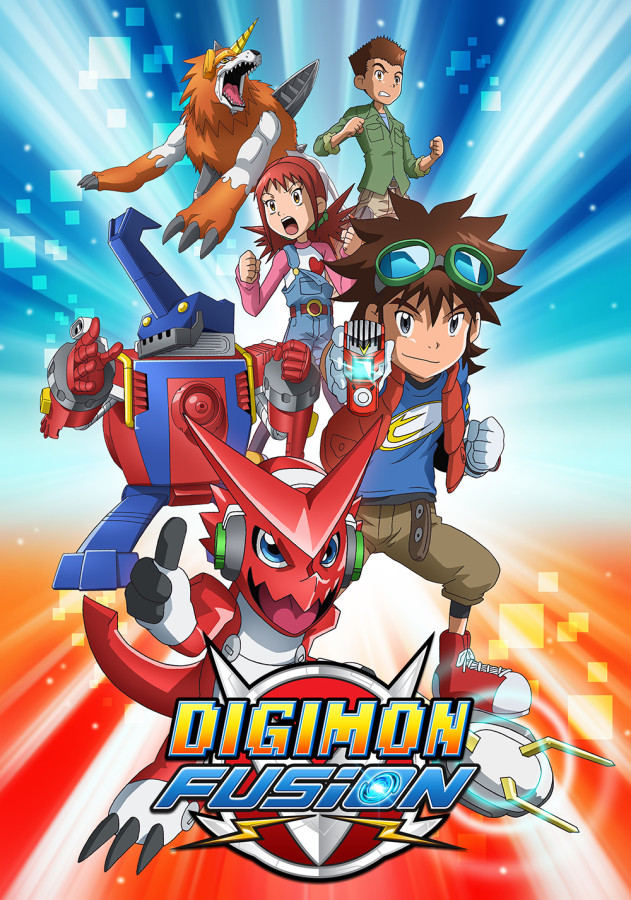 (This review applies to both this season and Death Generals)

Ah, Digimon. That name rings a lot of bells for people of the late 90's and early 2000's. What comes to mind? A group of kids who pair up with monsters who digivolve and save two worlds from a great evil. Sure it had it's cliche moments, but it really showed kids that anime was unlike anything that the American cartoons showed. For the most part, Digimon was daring, it took a lot of risks, and did a lot of things other shows wouldn't even dare to do, while still staying true to what it was: a great adventure featuring kids and their struggles. I'm definitely a Digimon fan as of right now, and I still remember seeing episodes when I was little. Unfortunately...I feel terrible for saying this, but I have to say it: as of now, Digimon has really fallen from grace. Things started to go a little off track with Digimon Savers (I really liked it), but things REALLY went awry with this new series, Digimon Xros Wars (I'll review Hunters separately).

Our main character is a boy named Kudou Taiki, our typical gogglehead who has a strong desire to help those in need. One day, on an outing with his friends, he hears a voice who claims he's dying, and the world starts to act weird. Taiki and his two friends find the voice, a Digimon named Shoutmon, and all of a sudden, he gets a device called a Xros Loader, a kind of digivice that allows him to fuse Digimon together and make them stronger. He and his friends get pulled into the Digital World, but it's not in the best state. An evil organization called the Bagra Army is trying to take all of the Code Crowns and take over the Digital World. Taiki, Shoutmon, and their friends form their own army called Xros Heart and decide to get the rest of the Code Crowns and defeat Bagramon. But there are other armies to deal with, like Blue Flare and Twilight.

Now where do I begin? Well, for starters, the animation...is kinda funky. One scene, it'll be really crisp and smooth, but other times it'll look like paint and gum arabic got mushed together weirdly. The animation's not the most consistent. Sorry, but Digimon Tamers looked a lot better than this in terms of the animation department, though even that had its errors. The music...by God, why does the OST have to be soooooo GOOD?! I really liked the background music for this, even though I have to admit most of the time it's rather generic. Not only that, most of the insert songs are great. I especially liked We Are Xros Heart and the terribly underused X4B The Guardian. Seriously, that song is BOSS!!! But one thing that really bugs me is that there's no ending theme! Yes, there are opening themes, but no ending themes. Just these dumb segments at the end which I never bothered to watch, and I have to admit, I feel this series uses too many insert songs in one episode. I just feel they were a bit too overused. Seriously, why did the creators use all of their budget on their insert songs and not use it to make an ending theme?! Come on! You can do better than this!

The characters...eh. Typical. You've got the kind but brash and happy-go-lucky gogglehead, the angsty lone wolf who hates everybody, the mysterious beauty, and two of the most useless and bland characters in the entire show, Akari and Zenjirou. Seriously, these two do absolutely nothing to make themselves engaging, nor do they even once contribute to the story (well, until the end, of course, but that's another thing entirely!). All they're used for is comic relief, and not the good kind! Watch the Jungle Zone episodes and you'll see what I mean. I don't like Kiriha, the lone wolf character. His angst is just really stupid and way too over the top, to the point where he just feels like a rip-off of Kaiba from Yu-Gi-Oh. Nene is just Rika but without her more overt bitchiness, and it doesn't help that they're both voiced by the same actress in the English dub. As for the Digimon...yeah, they were bland. Many of them are just there to be fused with Shoutmon whenever the situation calls for it, save for Dorulumon, Ballistamon, and Cutemon, who actually had their stand-out moments. The main character, Taiki, is just...really flat and shallow. His only real personality traits are that he's a good, helpful kid and that he occasionally pushes himself too hard, that's it. He rarely, if ever, has any moments where he grows as a person or makes really hard decisions, and the few times he has to do the latter, everything is made hunky-dory because of some plot contrivance which keeps him from truly changing as a character. He just feels like a mish-mash of other Digimon leads but without any real character flaws to make him feel more three-dimensional. It also doesn't help that at times, the writing is very inconsistent with him. At one point, Taiki will turn his back on someone who needs help because he feels they should do it themselves, but then he'll immediately go back on that and start helping people just because. Consistency, writers! It's not that hard! Shoutmon...I really don't like him. He's like a tiny robot dragon version of Naruto, always yelling and boasting about something constantly. Stereotypical power-hungry villains are stereotypical power-hungry villains.

The story just involves the separate armies trying to get all the code crowns while fighting amongst each other, and the quality of each episode varies wildly. Some arcs are very good (I really liked the Lopmon episodes), others are just flat-out bad, and some of them felt like they weren't even trying. I think where Xros Wars fails is that it tried to play things too safe. It thinks that by rehashing character designs, personalities, storylines, and not even bothering to develop characters who could really use it are enough to appeal to kids, but doing it the way it does just doesn't work. Everything feels too surface-level and lacking in real depth. And from what I've heard, Digimon's fall from grace has only gotten worse over the course of the next decade.

Basically, Digimon Xros Wars is a generic, formulaic kids show that plays it safe but doesn't try to be anything more than a surface-level rehash of what Digimon used to be. But don't even try going near Hunters, it's sequel. That's EVEN WORSE!!!
Collapse