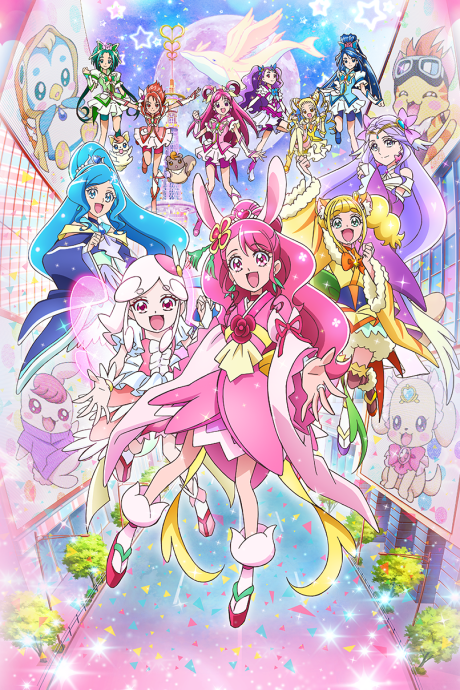 I give this movie crossover for one of the more recent Pretty Cure seasons...a 79/100.

Anyone who's talked to me at all in the past year and a half will know I've made it pretty clear that I LOVE Healin Good Pretty Cure. I think it's absolutely one of the best Pretty Cure seasons to come out in recent years. It has its problems, and I still think Heartcatch is better, but I just adore it. So of course I was looking forward to the movie that was going to be released for it as well...until I found out it was going to be a crossover with Yes! Pretty Cure 5. First off: Why another crossover? The All-Stars movies already do that! It's bad enough the franchise felt the need to shoehorn in the main Cures for the next series into the finale of a previous one when it's not needed, but the standalone movies are going to be crossovers, too? Furthermore, I have not seen Yes Precure 5 except for the first episode, and I have no intention of finishing it because Coco's voice annoys the piss out of me. Also, didn't Yes Precure 5 almost kill the franchise because the second season turned out really badly? But regardless of my feelings about it, the movie Eiga Healin' Good Precure Yume no Machi de Kyun! tto GoGo! Daihenshin!! exists, and I figured I might as well watch it before passing judgment on it...and because I want to see my precious Healin Good girls again. Now having watched it...yeah, this movie pretty much reinforces why shoving in the Yes Precure 5 girls was a bad idea.

Now for the overall story: Nodoka's mother takes her and her friends on a special trip to Tokyo to see all the sights, something they've been looking forward to for a while. They also get to see a special virtual reality entertainment experience invented by a famous professor by the name of Gashuuin and promoted by her young daughter Kaguya. But a mysterious demon named EgoEgo causes trouble, and with the help of Kaguya and a new group of Pretty Cure, the girls manage to drive it away for now. Nodoka and Kaguya become friends, and the five of them hang out together. But Kaguya is hiding a secret that could very well cost her her life, and her mother, knowing this, is determined to do all she can to save her, even if it means hurting everyone in Tokyo in the process. Surely there's a more humane way to solve things, right?

Since this is a movie, of course it has a higher animation budget than the TV show does, and it certainly shows. The colors are a lot brighter, character motion is more fluid, and the action scenes are full of great choreography. This is especially notable for the Yes Precure 5 girls, as their show, which aired back in 2007-2008, was pretty notorious for...not having much of a budget. This is probably the best the Yes Precure 5 cast has ever looked throughout their entire existence. Also, can I just say how much I love the Healin Good girls' new costumes and power-up outfits? As one-off and Deus Ex Machina-esque as they were, why didn't the show make use of their Partner Forms?! Those would have been a great addition to the TV series, and it fits with the show's themes of animals and respecting nature! The soundtrack is nice as well, though nothing too notable.

The characters are where things get muggy, and have about the same issues as the show. For one, the main characters absolutely steal the show, and the staff behind the movie made sure to capture the charm they had from the TV series. Surprisingly enough, Nodoka's mother received quite a bit of time in the limelight and was even given the chance to be a badass at one point, something I definitely appreciate. But similarly to the TV series, it seems to favor developing and fleshing out one villain over the other one, leaving the second one to just be yet another power hungry villain stereotype who's evil just for the sake of it. But the biggest victims of this were, in fact, the Yes Precure 5 girls. This movie reaffirms my worries about the movie being a crossover, as instead of doing anything meaningful with them and integrating them into the plot naturally, the movie just makes them into little more than plot devices that are just there to advance the plot and nothing else. This is especially jarring for someone who has never seen Yes Precure 5, so not only do they come off as extremely bland, barely being used for anything other than fight scenes, any viewers who haven't seen the show where they came from will just feel alienated, asking themselves "Who are these people? Why are they here? How did they even get here? How do they know about the Healin Good girls? How exactly does Pegitan know where they're even from?!" This is without even remembering that Yes Precure 5 aired between 2007-2008, and Healin Good came out in 2021, so any kids born after Yes's time won't know crap about them unless they found the show on the internet or something. I was told by someone else that the Yes Precure 5 girls being in the movie doesn't alienate viewers who haven't seen their show, but they're deluding themselves. Furthermore, the Yes girls only appear at the beginning and end of the movie, never interact with the main characters beyond action scenes, are only shown in their civilian forms ONCE, and don't directly affect the story in any way whatsoever. You could cut them out entirely and nothing would be lost, which gives credence to my argument that the Healin Good movie should have been a standalone movie JUST about the Healin Good girls, as the whole crossover aspect is the movie's biggest Achilles' Heel. There was literally no reason for the Yes girls to be shoehorned into the Healin Good movie in the first place, and the movie itself provides no in-universe explanation for their Deus Ex Machina-esque appearance anyway. Coco and Nuts in particular were especially useless, and their utterly awful, ear-bleedingly grating voices absolutely did not endear them to me at all. I'm so glad the movie didn't give them much in the way of screentime.

For what it's worth though, the story was at the very least intriguing. I liked Kaguya and Gashuuin's arc and cared about their plight. However, the creators seemed to rely too much on giving the girls random power-ups that come right the hell out of nowhere, hand waving it away with "Your strong feelings give you power!" and some crap like that. Don't get me wrong, I love my kids shows as much as anyone else, but you can't just give special powers to the main characters willy-nilly, they have to earn it, and the story just seemed to pull them out of its ass. Even other Pretty Cure seasons managed to execute this better, like Heartcatch and Suite. Though the worst example of this is still Mahou Tsukai Pretty Cure by far. At least in Healin Good, the girls don't get their power-ups by way of...well, dreaming about them while they're sleeping.

So yeah, as much as I wanted to like the Healin Good movie more than I do, its writing decisions and shoehorning in characters from another show that contributed nothing to the movie wound up being its biggest problems. Not only that, Toei doesn't seem to want to stop making crossovers any time soon, as the upcoming Tropical Rouge Precure movie is going to be a crossover with Heartcatch. Now, I love the Heartcatch girls and all, but again, there's literally no reason for Toei to put them in there except as glorified cameos and to sell toys. That being said, I still enjoyed the Healin Good movie for what it did do. Could it have been better? Yes. Would it have been better if it wasn't a crossover? Probably, depending on the staff behind it. But I am satisfied with what we got, and I love my Healin Good girls, and they pretty much saved the movie from falling apart completely. I still think this should have been a regular standalone movie without the crossover aspect, but it's fine for what it is. Normally I'd say to only recommend this if you know about Yes Precure 5 or have seen both seasons of that, but considering the reputation that that season has for...not being very good in a lot of ways, you're not missing anything by watching this even without knowledge of Yes Precure 5. Honestly, I wouldn't want to subject anyone to the bad voice acting on that particular season for 100 episodes (Looking at you, Coco!!!).
Collapse