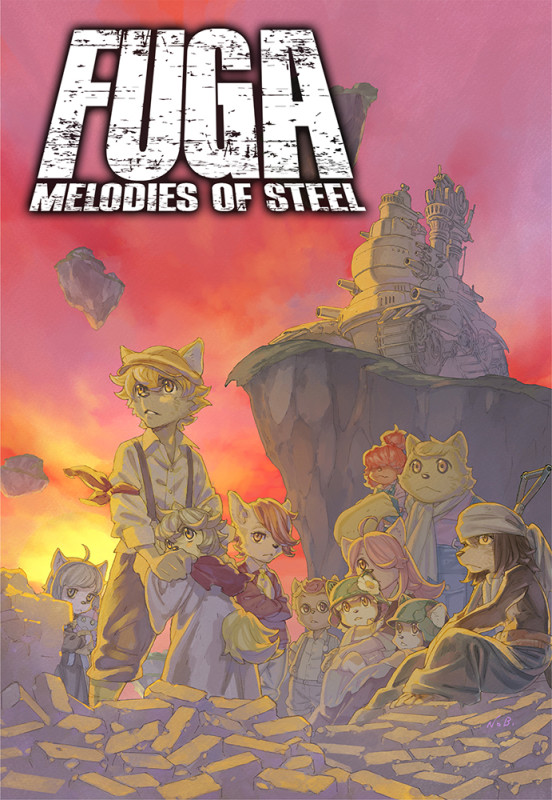 I give this dark strategy game about cute animal kids dealing with the horrors of war...a 78/100!

Do you like animal people? Do you like dark storylines? Do you find the idea of children being forced to see the horrors of war and even participating in it fascinating? Then Fuga: Melodies of Steel is the game for you. Published this year by CyberConnect2, Fuga: Melodies of Steel is the latest game in what CC2 calls their Little Tail Bronx series, which encompasses their previous games, Tail Concerto and Solatorobo. I have played neither of those games, and as much as I'd like to, I can't because they're out of print and any surviving games are super expensive now because of their rarity. I don't remember how I first heard about Fuga, but I did find the concept interesting, so I decided to buy it when it first came out. This is CC2's first self-published title, and because of this, they didn't exactly do well in advertising it, as they didn't have the backing of other companies such as Bandai-Namco to help them out this time around like they did for their previous games. Now that I've completed Fuga, I can say it's a very fine game, but I do feel like there could have been more.

The story takes place in a country called Gasco, populated by dog people, called Caninu, and cat people, called Felineko. The neighboring country, the Berman Empire, has started to annex a lot of Gasco's land. But the war is far away from the remote village of Petit Mona, where siblings Malt and Mei Marzipan, their families, and their friends live in peace. One night, the Berman reduce their village to cinders, capturing all of its inhabitants and taking them away. Thankfully, Malt and his friends manage to escape capture thanks to the efforts of their families, but are unsure of what to do now. A voice on a radio leads the kids to a nearby cave, where they find a gargantuan military tank known as the Taranis. Having no other options, the kids decide to reactivate the tank and use it to go after the Berman Empire in an attempt to get their families back, even if it means having to make very hard decisions in the process.

The gameplay mostly consists of you controlling the tank and choosing linear paths to follow, each with varying degrees of difficulty, though the game itself was intentionally made difficult by design, so even the easy paths won't be very merciful. Each character you control specializes in using different kinds of artillery, either machine guns, grenade launchers, or cannons, and you need to exploit an enemy's weakness in order to land damage in turn-based battles, though turn order is mainly decided by a gauge. This does result in the levels being rather straight forward and the combat being repetitive, but I personally didn't mind it myself. Of course, there's plenty to enjoy off the battlefield as well: the Taranis is basically a village in and of itself, allowing you to raise livestock, fish for scrap metal, upgrade the Taranis if you have the right materials, and talk to the other kids, where you can raise their affinity and skill prowess, and unlock little events where they talk to whichever kid you're controlling, though you only have a limited amount of times to do so. Fuga is a game that really wants you to use your resources carefully. To be honest, I wish there were more instances where you could have the kids spend time with one another in-game, as there are very few intermission points, the points where you can actually do that stuff, in every level, usually just two or three per level.

Which leads me to what I feel is one of the weaker elements of the game: The characters. Don't get me wrong, they're all a likeable bunch, even if they start off as rote stereotypes, and the game really tries its damndest to develop them and make you care about them, even in the supplementary motion comic videos CC2 uploads to their YouTube page. But the link events between the characters, while nice, are extremely short, and you're only able to unlock three every time you raise their affinity to certain levels, and while that feels like a lot, it really isn't. They don't have the depth of, say, the skits from the Tales series, nor the longevity of the heart events in Story of Seasons: Trio of Towns. Basically, I just wish there was more. Also, Boron is yet another fat stereotype character whose only notable traits are eating a lot and being constantly fat-shamed by the other characters. Seriously, CC2?! You couldn't put more effort into his characterization?! Not every fat person makes their whole life revolve around eating! Get it through your thick skulls already! Oh, one more thing: There's a character that, without the Soul Cannon, dies near the end of the main story, and in order to prevent that from happening, you have to raise his affinity to level 2 with every other character, but the game itself doesn't tell you this. Also, the graphics and artwork are nice, and the enemy machines are all very impeccably designed as well.

But what the game lacks in in-depth characterization, it makes up for with its story, dark tone, and the lack of sugarcoating behind its themes. Naturally, throwing kids in a war zone is guaranteed to invite sympathy, even if most media's attempts at doing so don't always work due to trying too hard with it or just generally being really cheesy. Fuga doesn't try to gloss over the fact that children barely older than 12 are being forced to participate in a war, or even kill people, nor the horrors that the Berman are committing against the citizens of Gasco. I mean, the World War II and Holocaust parallels/analogues are pretty unsubtle here, what with the Berman being heavily modeled after the Nazis, and an insane doctor committing genocide against a certain species of creatures even while being one of said creatures. One of the most well known gameplay aspects that really hammers this in is a weapon that the Taranis has called the Soul Cannon. If your HP gets below a certain point, you can use it to literally destroy any enemy, but to do so, you have to sacrifice one of your party members to be able to do so, and after the prologue, if you choose to kill a child and use the Soul Cannon, you won't be able to access that character or their abilities or events ever. Plus, the game auto-saves every now and again, so you can't just redo your decisions once you've made them. Although...the game's story and lore do leave a lot to be desired as well, because a lot of the story consists of events being told to us through a narrator rather than simply showing the characters reacting and experiencing them. This is another aspect of the game that leaves me rather meh, as I want to be more invested in it, but having a good 70% of it being only told through narration or by secret files you unlock whenever you beat a level just feels like the creators didn't do more to really incorporate its lore into the game proper. The phrase "Show, don't tell" exists for a reason.

However, there is one more thing about the game that I feel is really jarring: The game has both Japanese and French audio, with the narrator played by different actresses for both languages. But...apparently someone had the bright idea to make the Japanese seiyuu speak French and say actual French words. Don't believe me? The game doesn't have full voice acting, mostly limiting it to certain short sentences or exclamations, like shouting or the occasional grunt, but the characters' voices sound the exact same in both Japanese and French! Now, I don't know if this was intentional on CC2's part, and I'm not an expert on the French language, so I can't comment on whether the seiyuu actually said their French words accurately or not, but it just feels really jarring to me that someone would go to the trouble of training Japanese voice actors to say full French sentences when they could have just hired native French voice actors to do so. Or maybe CC2 didn't have the resources or funds to do that, I'm not sure. But, seriously...why?! If you're going to have a French narrator for the French audio, why not do the same for the characters?!

All in all, that's really about it. Don't get me wrong, I know my review sounds kind of negative, but rest assured that even with my reservations and bafflement with some of the game's decisions, I do genuinely like Fuga: Melodies of Steel. I do feel like, had it really done more with its lore and put more effort into presenting the story and fleshing out the characters, it really could have been a masterpiece unlike any other. But for what it is, I still found it to be a fun, gripping game that does have a lot to offer. It's easy to see that CC2 really wants to make more games for its Little Tail Bronx series, and Fuga got very little in the way of advertising, so if my review can convince someone to buy it and play it, if only so CC2 can see that people actually care about the work they do, then I can be happy knowing that I gave an underrated gem a little bit more appreciation than it's gotten.
Collapse