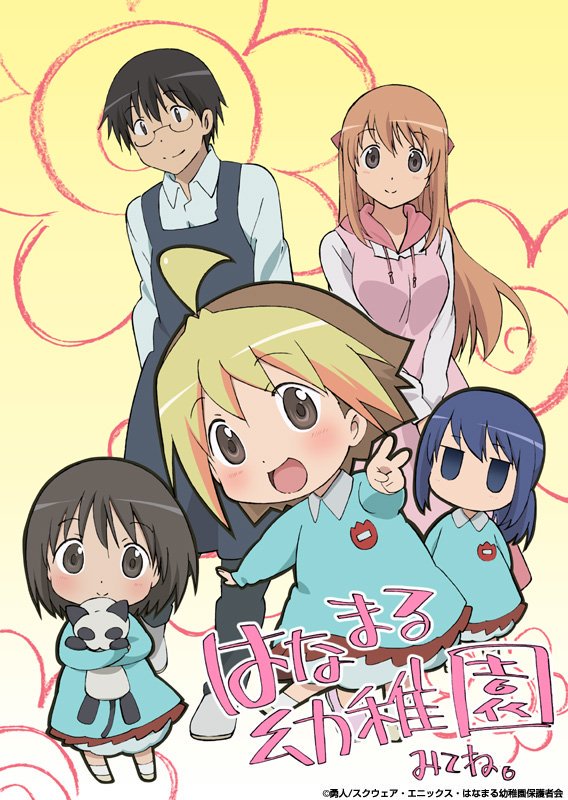 I give this cute anime about kindergarteners and their teachers...a 72/100.

I remember watching Hanamaru Kindergarten when it first came out, and while I liked it to an extent, I kind of forgot about it. I found it to be fun and cute, even if it never reached any highs for me. But I was bored one day and decided to rewatch it for the purposes of reviewing it, and...I'm honestly shocked at how much went over my head when I first watched this in high school. Yes, really. Anyway, the show is about a guy named Tsuchida who becomes a kindergarten teacher. On his way to his job, he comes across a little girl, Anzu, waiting for her mother, but Anzu thinks he's hitting on her. This isn't the case, obviously, but Tsuchida later finds out Anzu is the daughter of a girl he went to school with years ago. Anzu takes the whole flirting thing way too seriously and decides to become Tsuchida's wife...and her mother is totally okay with it for some dumb reason. And thus, the anime focuses on Anzu's day to day adventures with her friends and teachers.

Did you know that Gainax worked on this series? Yeah, I bet you never expected Gainax of all companies, directed by the guy who worked on Gundam 00 and Fullmetal Alchemist, to make a light-hearted slice-of-life comedy series about cute kindergarteners and their teachers having fun every day. I mean, I'm all for trying out new things, but this was unexpected, and in a good way. The animation itself is okay, and I like how every ending theme has different styles, genres, and soundtracks, with some bordering on parody. I do think the soundtrack can be way too saccharine and treacly at times.

My opinions on the characters are kind of mixed. Other than one character, the adult characters are pretty well written and nicely fleshed out. Tsuchida is pretty much your typical male anime lead, but he actually has a personality beyond just being a befuddled loser, actually has things he's good at, and his dynamic with the other adults allows his character to evolve rather than keep him as a stereotype. The other adults are great as well, and the series shows us why they decided to become teachers, their backgrounds, and their motivations, and they don't feel shallow at all. In that aspect, they actually trump the kid characters in the series...because let's face it, the kids in this show don't act like children. They're moeblob stereotypes shunted into toddler bodies, and they don't act like how four-year-olds typically act. For one, they talk way older than they should, are constantly harping about forbidden love, seem to understand concepts that no four-year-old should really know about, and while the fun role-playing and adventures they get into are entertaining to watch, Anzu in particular can really grate on your nerves. Also, why do the girls look like they're wearing oversized diapers? The kids aren't the only stereotypes in this, as Yamamoto, the female love interest, is basically a walking cliche amped up to eleven. I mean, how has this girl not sprouted wings and flown into heaven yet? Her whole character is that she's angelically nice and is such a ditz that she absolutely cannot figure out that guys are asking her out no matter how blatant they are about it. That cliche is overdone, and Yamamoto is the one dark spot among the adult cast, even though she does have her moments to shine here and there.

But those aren't the only issues Hanamaru Kindergarten has. For one, its attempts at drama come across as really shallow, mainly because they rely on stock cliches that have been done to death and it doesn't try anything new with them. Hanamaru also seems like it wants to have romance between two of the main characters, but puts this brick wall between them and doesn't even bother to do anything more with it, even at the end. However, my biggest issue with the anime is this: Much like CardCaptor Sakura, Hanamaru Kindergarten has a pretty accepting view of age-gap romances, almost to the point of idealizing and romanticizing them, much more so than the former does. Anzu's mother dropped out of high school to marry her art teacher, and is pretty okay with her 4-year-old daughter chasing after her teacher, even encouraging it, and the show doesn't make the case that she's just humoring Anzu either. But they really shouldn't be encouraging Anzu's behavior towards her teacher. I know age-gap romances are more accepted in Japan, but in America, if stuff like that happened, the guys involved would be arrested, and I have no idea why Hanamaru Kindergarten is trying to make age-gap romances seem like a good thing when they really aren't.

Of course, the series does succeed in being sufficiently entertaining, what with the show going buck wild with the kids' imaginations and showing off their crazy ideas, oftentimes using them for homages and parodies of Gainax's previous works. Hanamaru Kindergarten doesn't try to be anything more than what it is, and that's okay with me.
Collapse