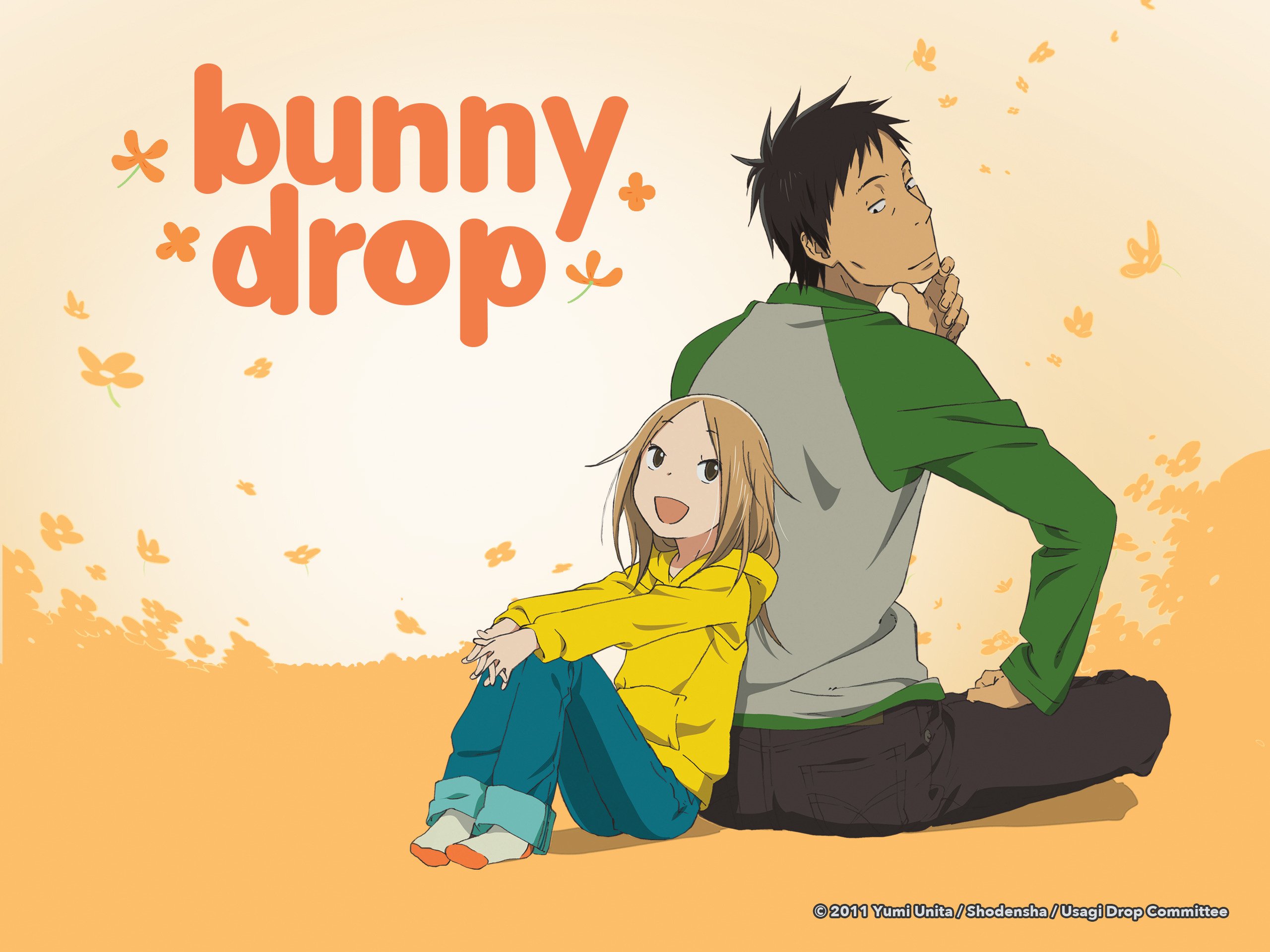 (This is a redone version of my older review from 2011. The older one comes across as too overly fangirly for my tastes, and my reviewing has evolved since then, so I made a new review to make it more in line with how my current reviews are now)

There was a time not long ago when Noitamina, an animation block in Japan, really pushed the bill and popularized two genres: adult slice-of-life and experimental horror/adventure. They did branch out to other genres over the years, to varying degrees of success, though nowadays, they don't put out as much quality work as they used to. Instead of focusing on teenagers, a lot of their anime focused on adults or college students, which really made the block stand out in its heyday. One of the shows they aired that I really liked back in the day was Bunny Drop, based on the manga by Yumi Unita, and even years later, I think it still holds up. Now, keep in mind, when the anime aired, its manga wasn't finished yet, and...the manga's ending has garnered a LOT of controversy, both in Japan and the West, so not a lot of people like the manga anymore. The anime avoids adapting the later parts of the manga, which I think is one of the reasons why it's still highly regarded today.

When Daikichi Kawachi finds out that his grandfather has died, he decides to attend his funeral with the rest of his family. But there's a child there that nobody recognizes, a little girl named Rin Kaga. As it turns out, Daikichi's grandfather eloped with a much younger woman and somehow managed to sire a child, with Rin being said child. Things are very awkward at the funeral as a result of this, and when the subject of raising Rin comes up, nobody wants anything to do with her, whether due to being busy with their own children, finding Rin's silence unsettling, or finding the idea of adopting a strange child they never heard of utterly scandalous in light of her questionable origins. Daikichi is appalled by his family's dismissive attitude towards Rin, knowing she's all alone in the world and needs someone to help her, so he decides to make a bold move: Offer to raise Rin himself, even though he knows absolutely nothing about raising a child. With this, he has to change his lifestyle completely, doing everything that parents do for their kids: Buying her clothes, making sure she gets to kindergarten on time, transferring to a job with flexible hours, learning to be more responsible, and trying everything he can to make sure she has the best life possible, no matter the cost to himself.

Bunny Drop as an anime chronicles the life of single parents, the challenges they face, but also the wonderful things they get back from it. It's a very realistic and down-to-earth anime, never making anything too dramatic, nor simply glossing over the problems that come with single parenthood or even familial issues on top of that, through introducing a variety of characters that Daikichi interacts with that are in similar situations. Any conflicts the series has, while never simply tied up in a neat bow, are approached with realism and grace, without unnecessary exaggeration or embellishment to make them seem bigger than they are. This is Bunny Drop's biggest strength, the fact that it remains a down-to-earth, but still fun and cute series that has characters that you want to root for. Some may take issue with the show's premise and pacing, as it's very deliberately slow and normal, having little action or ambition. Some shows don't necessarily need it in order to be good, and I think Bunny Drop is one of those shows that benefits from restraining its sense of scope, but if you're coming here looking for something more blood pumping or intriguing, this ain't the show for you.

It helps that the animation has a bright, soft color palette, and the character motion is seamless and smooth without feeling overly so. The opening and ending visuals, on the other hand, are deliberately eclectic, with striking, bold colors, harsh paint lines, splashes of watercolor effects, and with the occasional cut-out-like designs when it feels like it, and I think it works here, since I don't think the show could have made good opening visuals depicting just Daikichi and Rin by themselves. Going for a much more artistic look makes for much more creative freedom, and it works wonderfully here. The music is pretty nice too, though it's been years since I've listened to the soundtrack, but I do remember liking it. Also, who else was blown away by the fact that the opening was sung by PuffyAmiYumi, aka Puffy? They haven't really done much since then except for the opening theme of Teen Titans Go, and the less we talk about that trash heap of a cartoon, the better.

Of course, the show wouldn't be a success without its two main leads, and they really carry the show wonderfully. The show really puts emphasis on showing them spending time together and growing as people, and they grow far away from the typical stereotypes that are often associated with them. Daikichi grows from an immature manchild to a more responsible adult, and Rin isn't simply a precocious child whose only purpose is to make cheesy, snarky wisecracks for cheap comedy, she's just a regular kid going through her own issues and blossoming under the care of someone who truly loves her for who she is. Plus, the series doesn't try to completely idealize children and make them out to be perfect little angels, whether it be showing them pretending to be adults, wetting the bed and trying to hide it, coming into the house covered in sticks and mud, or asking for rulers to measure their poop. The anime adds to the charm by casting real children as the kids in the series, which makes them feel and sound much more authentic than listening to a 30-year-old woman trying way too hard to sound like a child. Bunny Drop is really about kids being kids and parents learning to raise them, and I want Daikichi and Rin to be happy!...though not in the way the manga does it!

So if you're looking for something sweet, wholesome, and just plain nice, definitely check out Bunny Drop if you can. It's one of my favorite anime and it deserves more love. Just don't read the manga. No, seriously. Please don't. The manga goes in an absolutely disgusting direction at the end that completely taints and spits on everything the earlier parts of it established, which the anime deliberately chose to avoid. You're not missing anything by not reading the manga. Trust me on this one.
Collapse