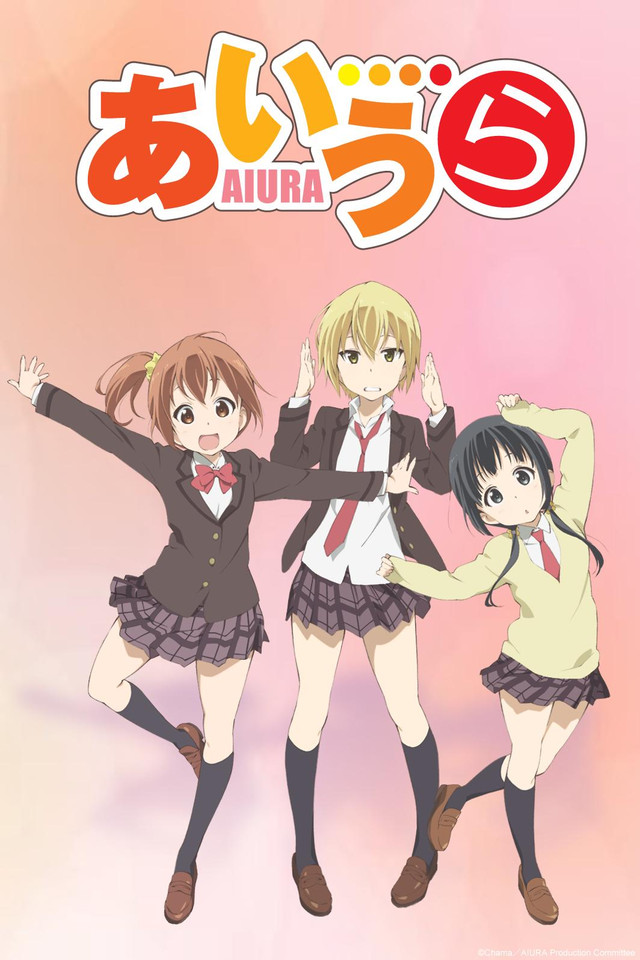 The subgenre of anime "Cute Girls Doing Cute Things" has gotten a bit of a bad reputation over the years...and some of it is for good reason. Most anime companies see it as an excuse to market moe girls who act younger and dumber than regular high schoolers do. While anime has always been a tool used for advertising at some point, there are just as many anime that prove you don't have to be soulless in doing so. Unfortunately, Aiura is one of the worst CGDCT anime I've ever seen. It's literally about three girls—Ayuko, Kanaka, and Saki—who just go to school, hang out, have pointless, cringey conversations that devolve into weird nonsense, and make Kanaka into the butt of their jokes. That's it. There is literally nothing to this anime at all.

None of the characters are memorable or likeable in any way whatsoever. They're all a bunch of one-note stereotypes who are as bland as wheat toast. Ayuko is the short girl who gets mistaken for a grade schooler, Kanaka is the peppy cheerful dumbass who's always the butt monkey, Saki is the straight man, and...oh lord, that one teacher Wakatsuki...don't even get me started on her. Her whole purpose is to be a cutesy moe shortstack who has a higher pitched voice than her students and mistake the (very reasonable and mature!) male teacher for being a pervert based on an absolutely baseless assumption. God, I wanted to smack Wakatsuki so hard in the face. Worst character in the entire show. Seriously, I can name several other CGDCT anime that have much more effort put into their characters than Aiura does.

Honestly, the show's only real saving graces are the lusciously detailed and fluid animation and the fact that every episode is two minutes long. I mean, the background art is colorful and bright, very easy on the eyes, and the actual motion is as smooth as butter...with the occasional obvious CGI, of course. It's kind of weird learning that Aiura was animated by LIDENFILMS, as their most recent project is the admittedly very ugly-looking Farewell My Dear Cramer. I mean, the difference in animation styles and the care put into them (or in Cramer's case, lack of care) is unbelievable. Plus, I'm glad every episode is only two minutes long, save for the opening and endings, which are both only 1 minute long. If this show had episodes that were half an hour long, it would have worn out its welcome long ago, though considering the show is pretty bad already, that's not saying much.

The soundtrack is...fine, for the most part. The background music and the ending theme are nice, but dear lord, that opening is so bad! Not only is it badly sung, it's basically a rip-off of a crap ton of other anime openings that are similar! Also, the actresses singing it are clearly straining when they try to sing really fast and high pitched, and the end result makes it sound like tin foil in a root canal. I mean, you have to TRY to be that bad. It actually hurts to listen to! Basically, Aiura is a bland, lazy, terrible slice-of-life moe girl anime that's best left forgotten. I can recommend several other slice-of-life anime that are way better, like Flying Witch, Place Further Than the Universe, Laid-Back Camp, and even Aoi Hana and Hitohira! Seriously, anything that's better than this piece of crap. Do yourself a favor and don't watch Aiura. The episodes may be short, but you'll want it back if you even think of watching this.
Collapse