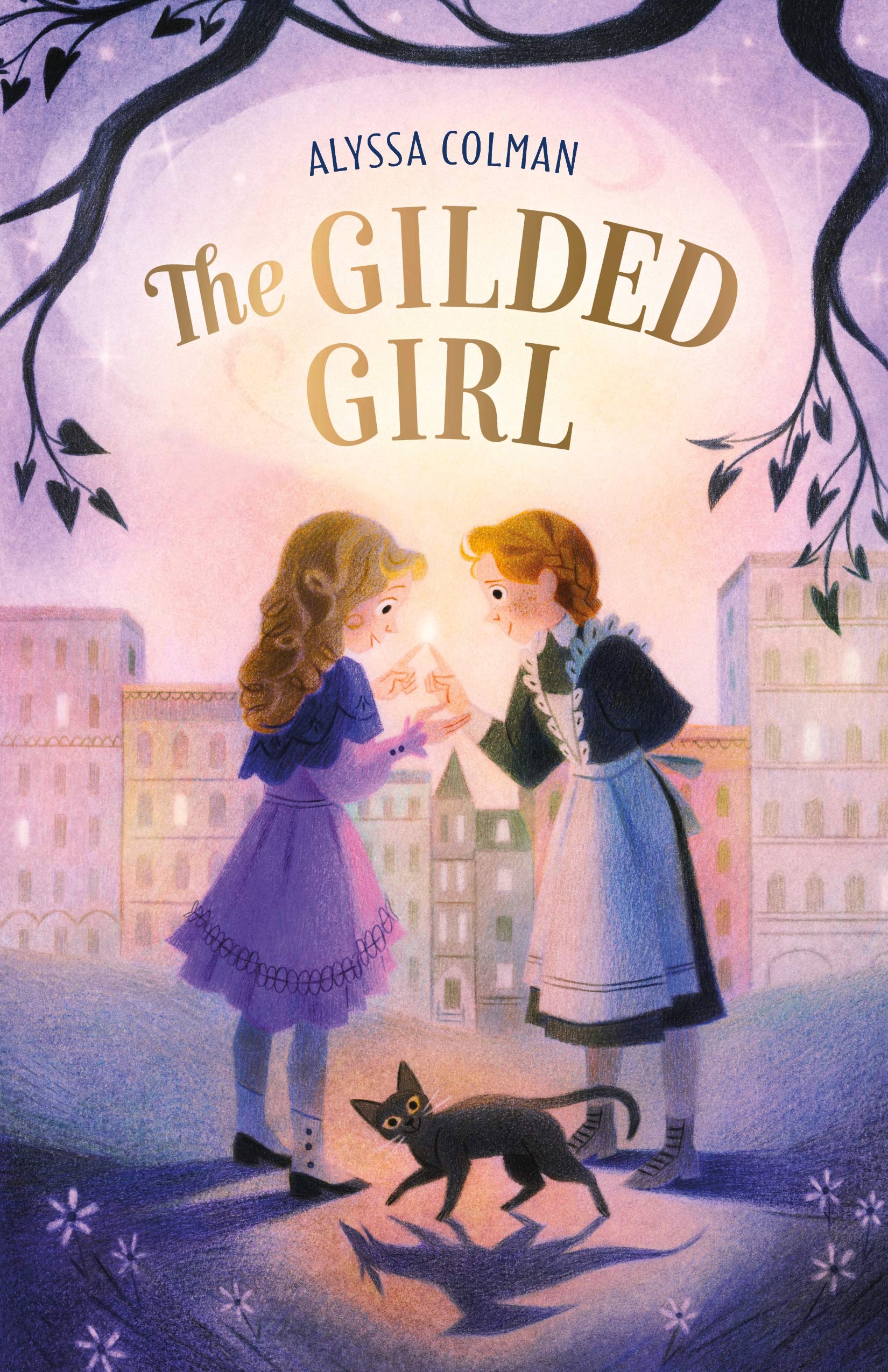 Man, I expected to just write a smaller review for The Gilded Girl, but this wound up giving me a lot more to talk about than I thought. Though...in the case of The Gilded Girl, I don't mean this as a compliment. To be perfectly honest, I didn't like this one, mainly because it felt so deriative. The story takes place in the early 20th century, but where magic is common, and a rich girl named Emma Harris is sent to a fancy magical boarding school by her father. But when her father dies and she's left penniless, the greedy headmistress, Miss Posterity, forces her to become a servant and treats her worse than dirt. To complicate matters further, Emma learns that only rich kids are allowed to utilize their magic to their fullest potential, whereas people of the lower classes, like her new servant friend Izzy, are forced to have it snuffed out even as the time of their magic kindling comes around. When a classmate's kindling goes haywire, Emma and Izzy have to work together to make things right.

I'm not going to mince words here: The Gilded Girl feels like a complete rip-off of A Little Princess, using the exact same premise, characters, time period, and story beats as it. Emma is Sara, Izzy is a more strong-willed version of Becky, Frances is Ermengarde, Beatrice is Lavinia, Miss Posterity is Miss Minchin, Clementine is Amelia, and so on. Even the order of events that happen is the exact same as A Little Princess. Rich girl gets sent to rich girl school? Check. Father dies, loses all her money, and is abused by the mean headmistress? Check. Mysterious man is looking for her but is made to go on a wild goose chase due to lack of details and false leads? Checkity check check. Even the magical elements such as the talking cat and kindlings feel tacked on in a bad attempt to hide the fact that the story is basically a rehash of A Little Princess. Take the fantasy elements away, and it's basically A Little Princess in all but name.

The only good thing I can say about the book is that the prose is fine, and it's decently well written for a book aimed at 8-12 year olds. As far as the characters ago, not only are they all bland and carbon copies of other characters from other books, even their development is woefully predictable, and they don't even change much throughout the book. Everything that the characters go through feels painfully obvious if you either have knowledge of A Little Princess or are familiar with the archetypes from other media. The only characters that don't feel like they were ripped out of A Little Princess were Tom and Figgy, but even they don't stand out enough to really feel interesting. In fact, I can't bring myself to care about any of the characters because they're just copies of all the ones from A Little Princess but without anything to really make them feel like they're characters in their own right.

With that being said, these days, it's impossible to create an original story anymore. I hold the belief that there's no such thing as originality anymore, and that execution matters. You can have the most cliche story in the world but if you actually care to create well-developed, believable characters that can drive said story, or even do something new with it, you can write anything. But there's a difference between expanding on an idea and doing something new with it, and simply adding something to an old story without doing anything with it. To me, The Gilded Girl is the latter, because if you take away the fantastical elements, it's basically a carbon copy of A Little Princess that makes absolutely no attempt to do anything new with its premise or stand on its own two feet. From what I understand, this is the writer's debut novel, and...it shows. Here's hoping she can write better, more polished novels in the future. Honestly, I'd skip The Gilded Girl, as there are plenty of other novels that do this same premise better, or don't try to shamelessly rip it off. Having been born in the early 90s, I never grew up with video games on home consoles such as the NES, SNES, and Nintendo 64. It wasn't until I graduated college and started working that I was finally able to get myself some home consoles such as the SNES, the Switch, and the Wii U. But many people I'm friends with did grow up during that era, and...well, let's face it, the SNES brought us some kickass games that are still revered to this day. Chrono Trigger, Earthbound, Final Fantasy 4 and 6, Secret of Mana, and those are just RPGs. But there are just as many games from that era that are more obscure and don't get a whole lot of attention, one of them being Actraiser, which just got a remake, called Actraiser Renaissance, that came out on the Switch, Steam, PS4, and cellphones this year. I never heard of it before then, but a friend of mine was super enthusiastic about it upon seeing the Nintendo Direct where it got announced, so I decided to check it out myself at his recommendation. After having played it myself, I can totally understand why fans of this game like it so much. While I wouldn't consider it one of the absolute best SNES games ever, I do find myself liking the remake a lot. Thanks, Curtis!

Since I haven't played the original version, this review is solely about the remake, Renaissance. Centuries ago, the evil lord Tanzra defeated the Lord of Light (Satan and God in the Japanese version, but Nintendo, during their heavy censorship phase, changed the names due to forbidding religious references) and sent him into a deep sleep. One day, the Lord of Light wakes back up and, together with his loyal angel servant, go across the continent to destroy his monstrous army and allow humanity to flourish once again. The game has two modes: One is the hack-and-slash action platformer stage, where you traverse various dungeons and fight various monsters and bosses. The second mode of the game is what makes Actraiser stand out from other platformers of its kind: After defeating various bosses and liberating the land, you and your angel are tasked with having settlers build entire towns from scratch, clearing away obstacles to allow them to expand their cities and settlements, along with completing various sidequests the more your worshippers expand their settlements. Basically, you're playing as God and watching humanity grow and evolve via a city simulation, which was unheard of for video games at that time, especially for action platformers.

As far as the graphics go, I think they're pretty good. The designs are sleek and modern while taking care to fit into the medieval/fantasy setting, the backgrounds are well drawn, the character portraits are lush and detailed, and the monster designs are pretty cool, too. There isn't too much to comment on in regards to the town designs during the simulation elements, as everything is really tiny due to being mainly a top-down perspective, but it does serve the purpose of showing that you're literally a God watching humanity grow right beneath you. I do appreciate that the game gives every settlement their own unique designs to set them apart from one another, from their houses all the way to the clothes the villagers wear, even if each game uses the same two male and female portraits for the citizens. But hey, even that's a step up from the SNES version, because the original version depicted all the villagers from each town with the same two sprites. The soundtrack is also an absolute bop, made by Etrian Odyssey veteran Yuzo Koshiro. From its epic sweeping orchestras to rip-roaring electric guitars, Actraiser Renaissance's soundtrack absolutely slaps! That said, the game gives you the option of switching to the SNES music if you don't want to listen to the rearranged OST.

One of the biggest expansions, however, was saved for the characters, at least the ones who are named. For one, in the SNES version, the angel was little more than an avatar you used to fight monsters during the simulation parts and had no personality of his own, and was just a naked cherub. Renaissance gives him a much bigger role, a new design, and a whole new personality from the ground up, making him a friendly and cordial, if somewhat sassy and temperamental angel. Furthermore, Renaissance adds a unique, plot-important character to every territory, each with their own personalities, backstories, and skillsets, which the SNES version completely lacked. Playing through their stories also nets you magic skills you can use on your enemies during the dungeon segments. Granted, I've played games that had more three-dimensional characters than Renaissance had, but I still found the characters here to be reasonably likeable, even if the angel can sometimes come across as being rather bratty and a bit of a know-it-all at times. Also, Daniella and Taia are my favorites.

So yeah, in terms of being a remake, Actraiser Renaissance really expands upon the original game and even rectifies a lot of problems it had, giving it much more content to do, including a post-game dungeon and continent. That being said, does the remake itself have flaws? Well...personally, I think so, but they'd probably come across as nitpicking for some. For one, Renaissance adds segments where Tanzra's minions send hordes of enemies to attack your settlements during the simulation parts, and while I can understand their purpose, I often found them to be very tedious. For one, you lose if the monsters destroy your temple, towers, or fields, and while you can use the plot-important characters to fight them off, the hordes involve sending a ton of monsters out in different directions, and you never know where they'll pop up next. Success really depends on how well you place your fortresses, and often times, there'll be so many monsters that you'll end up using up your magic, and magic restoring items don't respawn a lot during those segments. So you could find yourself spread really thin and wind up getting killed easily. I had a lot of trouble with the hordes myself, even on Easy mode! Second, even with all the expanded content, the game is still rather short, as you can complete it in under 16 hours, which is far less time and content than most games nowadays...and because of this, I feel the game is really overpriced. Actraiser Renaissance is $30 on the Nintendo Switch eShop! I really don't think $30 is enough to justify buying a 16-hour game. If the game was between, say, 30-60 hours I can understand, but less than 20 hours of content for $30? Uhh, no. Then again, games on the Switch are pretty pricey overall, with physical copies going for $60 at launch nowadays, so I guess I can't really complain, now can I?

That being said, I don't regret buying Actraiser Renaissance one bit, and I probably wouldn't have even given it a second look if my friend hadn't recommended it to me. Whether you're a fan of the original game or no, Actraiser Renaissance is definitely a game that shouldn't be overlooked. Check it out if you can. I had a lot of fun with it, so maybe it might just be something you'll enjoy if you're willing to give it a chance.
Collapse