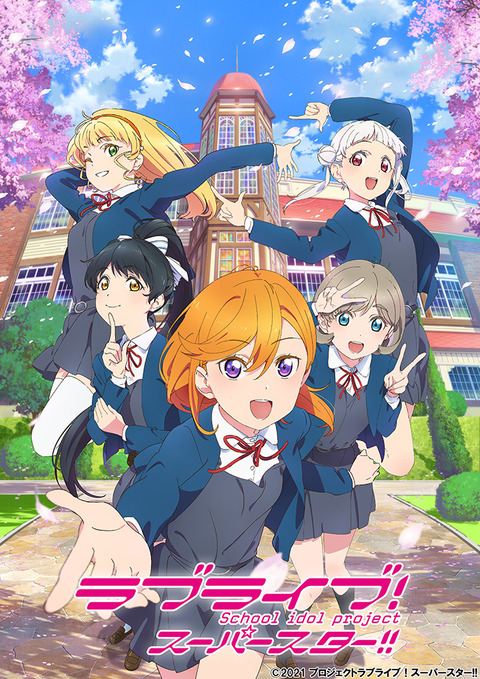 (From now on, I'm getting rid of the "I give this X piece of media" sentences before the rating because they're getting old and repetitive)

So...yeah. It's official, I'm in the Love Live fandom now. Kinda. After being blown away by how good Love Live Nijigasaki turned out, and for the fact that it seems like the creators have gotten rid of the whole boob groping shtick that plagued other seasons (Which everyone knows is a huge turn-off for me personally), I figured maybe it'd be good to give Love Live Superstar a try. Being a completely new series that doesn't require knowledge of the other seasons, I figured this would be a good jumping point into the fandom as a whole, since the Nijigasaki anime is based on a cellphone game and is considered more of a spin-off than anything, and to tide me over before season 2 of that comes out. Though as you can tell by the rating, I do happen to like the Nijigasaki anime a little more for a variety of reasons, but I don't want to start this review off on a negative note.

Ever since she was a little girl, Kanon Shibuya has always loved singing...but she gets terrible stage fright and can't bring herself to sing in front of anyone without fainting. She tried to get into Yuigaoka High School's music curriculum, but due to said stage fright messing up her audition process, she was forced into the general curriculum. Disheartened and disillusioned, she thinks her dreams are over before they even start. One day, a classmate named Keke Tang overhears her singing and begs her to start a school idol club with her. Although initially cowed by Keke's intensity and lack of respect for personal space, she does warm up to the idea, helping her start a school idol club and being part of it so she can change herself for the better. Along the way, they gain three more members: Chisato Arashi, Kanon's best friend, Sumire Heanna, a boastful girl who's mainly in it for instant fame, and Ren Hazuki, the student council president who was initially opposed to the idea of having a school idol club in Yuigaoka at all. The five of them do all they can to promote their school and become the best school idols they can be.

Since I saw the Nijigasaki anime first, I'm more familiar with that show's animation style, though I have seen clips of the first Love Live anime by way of someone's internet review of it and did some research on SIP and Sunshine, so I have some idea about the basic formula. Basically, animation-wise, Superstar is a mix of the old art style and the Nijigasaki one, bringing back the shading and bright colors of the original art style, along with details like added sparkle to the characters' eyes, while keeping things like the slightly less detailed facial structures and the improved CGI. I will say though, Superstar's animation really rocks. The backgrounds are all impeccably detailed and full of eye-popping colors, and while the actual animation doesn't always land at times, it really stands out when it does. Plus, the CGI continues its streak of improvements from previous series, looking much sleeker and less jarring and stiff, to the point where the transitions from 2D to 3D and back don't feel as obvious.

Of course, you can't have a Love Live series without good music to back it up, and that's definitely one thing Superstar has going for it. Many of the songs in this series are not only well sung—which is even more mind-blowing when you find out the seiyuus for Liella are complete unknowns, with this being their first gig—but they also have a lot more variety in their lyrics and instrumentation compared to the first two Love Live anime. I also really liked the little "Liella no Uta" ending segments exclusive to the NHK broadcast, with much slower, low-tempo songs and animation in the style of watercolor storybook illustrations. Those are the songs that really sold me on Liella's music. That being said, I do think the actual background music can come across as being a little too cheesy and melodramatic at times, mainly with the swelling orchestras that play during the really dramatic scenes, which makes it feel like it's trying way too hard to sell a scene as dramatic that it borders on obnoxious. I mean, it's not bad or anything, and most of the BGMs fit the feel of the show, but like they say, less is more.

One of the things Superstar tried to do differently from other LL series is to cut back on the amount of characters it centers on. The first two series had centered on nine main girls, with Nijigasaki doing ten before expanding to thirteen later on (Same with the cellphone game), Superstar instead cuts it down to five. This is good because, from what I've read, most Love Live anime often struggle with giving some characters focus while not giving enough to others, which is common with short anime that happen to have a large ensemble cast. Because Superstar cut down on the amount of characters it has, it has ample time to give each character equal amounts of development, and I think Superstar succeeded on that front, even if the main cast do adhere to typical anime archetypes, like the ditzy genki girl, the bratty egotist, the prim and proper rich girl, and so on. I found their development to be just fine, even if it's on the cliche side, though I did feel one character's arc seemed a little too sappy and rushed for my liking. If I had to pick a favorite, it'd be Kanon, mainly because she's a far cry from most idol anime protagonists in that she's smart, disillusioned and cynical due to feeling like her dreams are over, and actually has character flaws that need to be overcome...though the way the show tries to make her overcome it near the end of the series is not exactly the most...ethical.

As much as I hate to do this, I wouldn't be a fair critic if I didn't point out Superstar's flaws and setbacks, and...it has quite a few. Love Live has had a history of relying a lot on unsubtle melodrama in an attempt to really tug at your heartstrings, and Superstar is, unfortunately, no different, especially near the end. I mean, it's not to the levels of Elsie Dinsmore, thank God, but some scenes make it pretty obvious that they're screaming at you to "BE SAD! BE HAPPY! CLAP YOUR HANDS AT THIS EMOTIONAL SCEEEEENE!!" to the point that it borders on self-congratulatory at times. Again, the saying "less is more" exists for a reason, and some of them could have had more logical solutions and presentation than what they did here. Secondly, and this is more a personal pet peeve of mine than anything: Keke's voice is annoying as hell. I mean, not only does it sound really grating and shrill, it often sounds like her voice actress is trying way too hard to make her voice high pitched and cutesy, but instead makes her sound really screechy or obnoxious or like she's phoning it in. She sounds like a screechier Judy Holliday. I mean, it wasn't so ear-bleedingly bad that it made me not want to watch the show (Looking at you, Hikaru from Star Twinkle Pretty Cure), but seriously, her voice actress really needs to dial back the artificial squeakiness. Like, A LOT. Which is weird to say, because when she sings, she sounds perfectly fine! Third, apparently Superstar decided to reuse one noteable plotline from previous LL series. Since I haven't seen SIP and Sunshine, I wasn't really bothered by it, but upon hearing that this is the third time Love Live has decided to use this particular subplot...yeah, I can totally see why fans would take issue with the series continuing to rehash the same tropes and storylines over and over again...and ultimately, that plotline was quickly resolved at the very end through a very cheap, out of nowhere Deus Ex Machina that just made me wonder why they bothered to reuse that same subplot if they were going to tie it all up at the end anyway.

That being said, while I do admit to liking the Love Live Nijigasaki anime better, I can't really bring myself to be too mad at Love Live Superstar. There are way worse idol anime, and way worse anime in general, than it, and I do think it's positives do shine through, so I wouldn't necessarily give it the side eye. Plus, I'm just happy the Love Live anime canon decided to finally ditch the whole breast groping shtick. Thank you for finally taking the hint, producers! So yeah, if you want to get into the franchise to some extent but don't know where to start, maybe give Love Live Superstar a try. It's sugary sweet and has a lot of heart, and in these hard times, a bit of positivity and optimism is very much needed. Also, the song "Nonfiction" is an absolute banger.