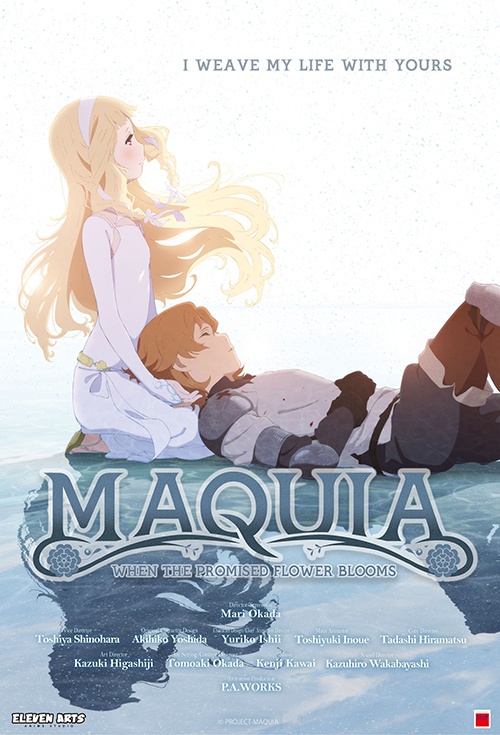 When I first heard about Maquia: When The Promised Flower Blooms, I knew it was going to be something special. I mean, not to diss anime as a whole, but these days, a lot of anime seem more focused on fan service and putting characters in dumb, sexual situations for kicks and giggles over telling riverting stories involving compelling characters you can care about. Thankfully, though they're far fewer in number, they're still being made. Whether they're movies or TV shows or just short OVAs, genuinely good anime are still there, especially the ones that really remind you of what makes anime truly amazing. Maquia is definitely one of those anime. I admit, I'm kinda torn about this one, because it has everything I love in a good anime and is very beautiful, but it does have a lot of flaws that prevent it from being a true masterpiece in my eyes.

The story centers on a woman named Maquia, who hails from a clan of people who stop aging physically when they turn 15 years old. She lives a peaceful life in the village of Iorph with her friends and family. However, everything changes when an army from the Mezarte Empire attacks her village. Maquia manages to escape, but her friends aren't so lucky. One of them, Leilia, is kidnapped by the royal family for the purpose of creating an immortal heir, and others go missing. As she's lost in her grief, she comes across a newborn baby whose family was killed in the onslaught. Taking pity on it, Maquia decides to raise the baby as her own, naming him Ariel. But she knows full well that unlike her, Ariel will grow up and age, and in the process of learning to be a mother and raising him, she's intent on finding her friends and making it through the Mezarte Empire unnoticed by those who hurt her friends.

Full truth: Maquia was actually P.A. Works first feature-length animated movie, but you wouldn't know it just by watching. Seriously, the animation is absolutely stellar. The background art is lush and beautiful, from the light reflecting off of tranquil waters to antiquated stone buildings that depict the Iorphs' home as a land frozen in time. Everything absolutely oozes with vibrance and life. The way the characters move is so fluid that you feel like they'll pop right off the screen. This is especially true in every scene involving a tavern, and there's one part where some of Maquia's patrons slam their wooden spoons on bowls, cups, and tables like they're drums during a happy hour. To me, that part alone was the most well animated scene in the entire movie. Plus, the war scenes are very striking and hyper detailed, with no single character being little more than a gray blob in the background or a still frame used to save costs. There's always something going on in the background, making the world of Maquia feel so much more alive. The music also helps in not only capturing the medieval feel of the movie's setting, but setting the mood for every scene, especially the big, heavy, emotional parts that are sure to strike a chord in anyone. Each track feels distinctive and unique, even with similar instruments being used over and over again.

The characters are where things start to get kind of...mixed. Don't get me wrong, I loved the whole ensemble, and every character brings something to the table, so in that aspect, they're all great. Maquia herself is a very good main character, even if she doesn't look or act like it. She's a young, frail woman who's very sheltered and doesn't always know what to do. She's not snarky, sassy, physically strong, or even very complex, but she goes through some pretty bad things and still manages to be true to herself and be herself even in the face of adversity. The other characters are admittedly rather one note, and since this is a movie, there's only so much time you have to develop the characters. Plus, the movie's themes involving the passage of time means you see them change over the course of the film. Some changes are good, and some...not so much, what with Ariel being more sullen and moody as a teenager. Still, I loved all of the characters, though I did think the Mezarte family seemed a bit too stereotypically evil.

Unfortunately, as much as I absolutely want to exalt this movie as a full blown masterpiece, I can't deny that it has some pretty significant logical problems that really hurt it. First of all, the Renato dragons. What's their deal? The whole Red Eye issue was never resolved, the movie doesn't really explain what Red Eye is and why it makes them go berserk, and it seemed like the Renatos were just used as living props to move the story and characters forward rather than being characters in their own right. Plus, with the movie's themes involving the passage of time, it tends to jump around a lot from time period to time period without really clearing certain things up. For example, Ariel gets bullied by a girl named Dita early in the movie, but later on...out of absolutely nowhere, it's revealed that somewhere down the line, he met back up with her, married her, and she's pregnant with his kid. What?! This raises a crap ton of questions. How did he meet back up with her? What made them fall in love and get married? Why would Ariel want anything to do with her after she bullied him so long ago? This comes right out of nowhere with zero explanation, and the movie doesn't try to establish how they got together, and its haphazard pacing in this regard, and in other scenes, really hurt the movie.

However, I consider the film's biggest flaw to be this one scene in the end, where a certain character acts completely out-of-character despite her earlier depiction. I won't go into spoilers, as that's not allowed, but this character is repeatedly stated to love another person, but when they actually see said person again, they just leave and forget about them, like she never even cared about them in the first place. Not only does this completely go against her characterization in the movie, which is just bad writing IMHO, but her actions actually have a lot of really dark ramifications that I don't think Okada and the other writers caught on to when making it. I know a lot of people complain that Okada's anime tend to be melodramatic and heavy handed, which I can get behind, but I think those elements not only worked in the movie's favor here, but were much more reigned in this time around. That one scene I mentioned leaves a pretty nasty aftertaste in an otherwise great movie.

(If you want more details, click on the cut below, though there be spoilers, so tread carefully)

Specifically, the scene where Maquia and the Renato rescue Leilia, and Leilia, FOR SOME REASON, randomly decides to leave Medmel behind and tells her to forget about her. Uhh...WHAT?! Okay, first of all, from the very beginning of the movie, Leilia has gone on and on and on about how important Medmel is to her and how she wants nothing more than to see her daughter again, even though she's been forbidden from ever seeing her by the crap royal family that kidnapped her. Hell, when Krim asks her to choose between him and Medmel, she chooses her daughter, and he dies shortly after! The movie kept establishing Leilia as wanting to see her kid, but when she finally does and is freed, she just...suddenly decides to leave her behind and tells her to forget about her? Okay, I know people don't like Okada's writing because she leans into melodrama, and I can understand that, but the melodrama in this movie never bothered me all that much. This scene, THIS ONE SCENE, I feel, is the movie's biggest flaw, as it's the most blatant example of straight up character derailment I've ever seen. You don't make a character soapbox about how much they love their kid, and then randomly decide at the end that she doesn't want her anymore. That's bad writing!
Not only that, if you really think about it, Leilia's actions basically seal Medmel's fate. She could have taken Medmel with her to the Iorph village and given her some semblance of a happy life. There was literally NOTHING stopping her from doing so, especially since, by that time, Mezarte had crumbled to the ground. Instead, Leilia deliberately left Medmel with an abusive, neglectful family that has made no secret of the fact that they hate her guts because she's supposedly not immortal and that they use her as a means to an end. Not only does this seem really out of character for Leilia, her decision makes her come off as a selfish, dirty, lying hypocrite. Seriously, did the writers NOT consider these ramifications when writing this scene? I'm not even a professional writer, yet even I was able to figure all this out! I love this movie and all, but that one scene really left a nasty taste in my mouth, which is a shame, because the rest of the movie is great IMHO.

I often watch Doug Walker/Nostalgia Critic's reviews, and one specific moment in his Snow White mini-review for Disney-cember spoke to me. He described Snow White as being a movie that doesn't show you what you logically or ethically want to see, but what your emotions want to see. In that aspect, Maquia is basically this in a nutshell. The movie is absolutely fueled to the brim with emotion, practically bursting at the seams, often times at the expense of pacing, character development, and plot threads that really need to be resolved, so it's not always for the better. I think most of the movie's problems can be attributed to the fact that it seems like it'd be better fit for a TV series than a movie, that way many of its plot threads can be tied up and many of the subplots getting more screen time than the medium of films allow. Is Maquia a perfect movie? No. Is there room for improvement? Oh, hell yes. But in all honesty, Maquia is still a genuinely great movie filled with a lot of heart that'll definitely resonate with anyone, whether they're a parent or not. I'd rather watch a flawed but still good movie over a straight up bad movie overall.

While not without its problems, for Mari Okada's directorial debut, I think she hit a home run with this one. If you're looking for a good movie that'll grab you by the feels, then this is the one for you. Just have a box of tissues handy.
Tags: anime, blooms, flower, maquia, movie, promised, review
Subscribe