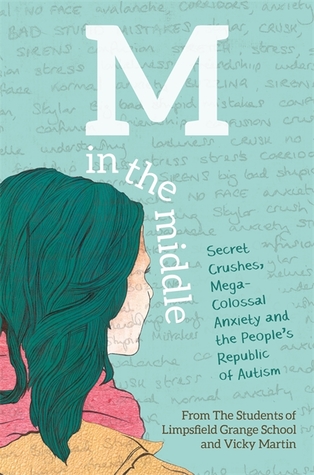 I give this book about an autistic girl who was just diagnosed...a 60/100.

When it comes to fictional media that depict autistic characters in some capacity, there are usually two types of books. There are the books that, while not perfect, go out of their way to develop and flesh out the autistic character in a nuanced, non-stereotypical, realistic, and sensitive way (Examples include A Boy Called Bat, Queens of Geek, Planet Earth is Blue, Anything But Typical, etc.), which show that the author either did a lot of research on the subject, with help from both autistics and researchers on the subject, or are autistic themselves. There are also the books that, unfortunately, take the stereotypical route and depict autistic people as nothing but soul-sucking, life ruining, overgrown man children who throw tantrums 24/7 and dabble in all the untrue stereotypes that continue to stigmatize autistic people today (Curious Incident, the Gone series, Chime, and a few others). I read M in the Middle today, and…while the main character is a relatively well realized autistic character, I found the book to be a huge slog to get through. It’s a shame, because I want to like this book more than I do.

The story centers around M (Her real name is never mentioned), a young girl who was recently diagnosed as being autistic, and she isn’t quite sure what to make of it. But despite her new diagnosis, life is still hard for her. Her parents divorced and they can’t understand her for the life of them, her older brother Toby seems to blame her for their divorce and isn’t around as much, kids are bullying her at school, a person she thought was a friend turns her back on her, and many teachers seem to think she’s just some bad kid who needs to be disciplined and don’t believe she even is autistic, or if they do, think she’s just throwing tantrums and being deliberately rude. M tries to make the best of things, make friends, and fit in like any other girl her age. But things don't always go the way she wants them to, and in the process, she may wind up hurting her reputation and place in school.

I didn’t really like this one, for quite a few reasons. I can basically sum up the whole book, save for the very last third, with one sentence: Everybody hates M and wants to make her life miserable solely because she exists. Rain Reign had this problem, and unfortunately, M in the Middle has this problem as well. In every single chapter, M is either struggling, getting yelled at, being scolded for something by people who are supposed to be there for her or help her, even when she’s doing everything they say, or basically being treated like a nuisance. Even when she manages to find a sliver of happiness, it all gets taken away from her, whether it’s through her own doing or someone else. M is given little to no reprieve in anything, and the few characters who are shown to care for her get very little page-time and disappear after a few chapters. Thankfully, the final third of the book does away with this and finally gives M the gratification she deserves, but I feel it was too little, too late for my liking. There's only so much sadness and suffering one can take!

One of the biggest subplots in the book involves M taking 20,000 pictures of a boy she likes off of Facebook (Someone else posted them on Facebook. M just saved them off of there) and storing them into a folder on a school laptop she uses. Understandably, she’s accused of stalking, even though she isn’t, and gets in huge trouble for it. That part I find understandable, because if someone stores a hundred pictures of a single person on their computer, most people will be quick to assume the person is stalking someone. It is sad that M doesn’t understand what it is, so she was never told doing what she did would be considered a bad thing and has to face the consequences of her actions. By this point in the story, you know enough about her to know she wasn’t trying to hurt the boy she had the pictures of, so you feel for her when she gets in trouble. In that aspect, I can understand why teachers would want to punish her. However, what I find hard to swallow is the fact that 20,000 pictures of this guy even exist at all. I mean, the pictures all take place at one party, and would anyone even take that many pictures of one person in one place and post them all on Facebook at a time? Most kids sharing pictures on Facebook, especially kids aged 12-13, would post at the maximum maybe 40-50 at one time. 20,000 pictures of one person in one place over the course of one day just seems really unlikely from a logical standpoint. I’m an adult, and at most, I only have a little over 2,000 photos on my cellphone over a period of seven years. I think the author or authors did this to raise the stakes for M’s place in the school, but with how poorly written this subplot was, I think all it did was wind up being needlessly melodramatic. It’d make more sense if M, say, got into a physical fight with a classmate or assaulted a teacher or something, as those do happen and would make having M face serious consequences more understandable. I’m not saying M needs to be violent, as not only is that a stereotype of autistic people in itself, but again, having a middle school girl save 20,000 pictures of a single person, all of which were taken in one day and in one place, is not only really illogical, but is way too overblown.

I will say one thing in the book's favor, though: The prose is pretty good, and various sized fonts are used to convey M's emotions, speech difficulties, auditory processing issues, and lingering anxiety, like getting really big when she's hit with a bad memory or when she's about to have a breakdown, or having one word be one paragraph when she's having trouble processing something in her head or showing a downward spiral. The writer does do a very good job at putting us in M's head and showing us why she does what she does without diving into the stereotypes that are all too common when writing about autistics.

The happy ending does alleviate my concerns about this book being too bleak, but after having to dredge my way through nothing but non-stop suffering, sticking the landing doesn’t mean I’ll forget the screw ups in the routine before it. I feel kinda bad for harping on this book so much, as it does do a great job at showing M as a fully realized, three-dimensional person who just happens to be autistic, and her autism is one of the better written portrayals in recent times. Unfortunately, it's just too bogged down by needless suffering and one-dimensional characters who just exist to be cruel to M to truly be something better than it is. I wouldn't recommend this one for the story. If you want to read about an autistic character who isn't being crapped on by everyone around her, go check out Planet Earth is Blue, Queens of Geek, A Boy Called Bat, or Anything But Typical instead.
Tags: book, m, middle, review
Subscribe