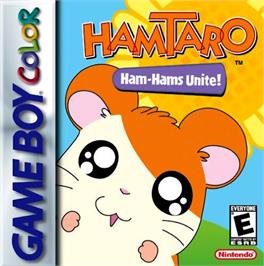 Real time: When I was a kid, I LOVED Hamtaro. I attempted to watch it every chance I got, and I say attempted, because at one point in my childhood, my parents signed me up for some after school program that required me to stay for another hour, and new episodes of Hamtaro happened to air at 3:30 every single day around that time, so I missed a good chunk of episodes. I was pissed for a long time about that, even more so when it randomly got cancelled. This was before DVR, so I couldn't record any episodes unless it was on tape, and I didn't know how to do even that. It doesn't help that to this day, other than a few DVDs containing a slew of early episodes, the series, dub or sub, has never gotten a full release here on home video. I did, however, get my hands on every game that came out in the US, with Hamtaro: Ham-Hams Unite being the first one!...though I have to admit, it's oddly difficult for a game aimed at kids. I got this when I was eight or nine, but never managed to complete it until adulthood. Weird, right? But how well does it hold up as a game? Let's take a look, shall we?

The story's nothing really special. You play as Hamtaro, and Boss wants you to find all the Ham-Hams and bring them back to the clubhouse because he wants to show them all something. That's it. The entire game is about you searching for the Ham-Hams and learning made-up words called Ham-Chat. The game relies heavily on you learning these words and going out of your way to figure out how to learn them. Some of the ways of doing so are easy to figure out, and others...not so much. Don't let the game's cutesy visuals and lackluster gameplay fool you. If you don't know what to do for certain scenarios or know how to solve the various puzzles, learning various Ham-Chat words can be next to impossible. The game threw me for a loop as an eight-year-old discovering the joys of GameBoy games because of this. It does help that the game is rather short, and you can complete it in about six or so hours if you manage to do everything you need to.

Don't expect the characters to be super complex or three dimensional or anything, as this is a game aimed at children. For the most part, the characters and their personalities are true to their counterparts in the anime, with Dexter and Howdy always arguing over Pashmina, Penelope saying Ookwee, Jingle being a philosophical guitar player, so on and so forth. But in the game's universe, there's not a whole lot to them, and when you finish their required storylines and bring them back to the clubhouse, they don't really do anything else after that. Then again, I suppose part of this may be attributed to the GameBoy cartridge's lack of internal storage space, as it can only hold a certain amount of data, so the creators had to make do with what space they could use. Plus, Hamtaro doesn't talk here, so you won't hear him saying much unlike how he was in the show.

One thing I can say in the game's favor is that the graphics are very bright, colorful, and detailed, especially by GameBoy standards. The hamsters, even the NPCs, all have unique, distinct looks, even if many of them are color swaps, the environments are brimming with detail, all seen from the perspective of a hamster, and the sprite animation is completely smooth and seamless. Considering this turned out to be the last GameBoy game put out by Nintendo, it shows that they wanted to end the GameBoy Color era with a bang, and I think in the visual department, they really pulled it off. It helps that the game manages to capture the soothing, light hearted feel of the show, almost as though you're watching an actual episode of the anime. But regardless, it has virtually nonexistent gameplay, and its simple premise and overly difficult puzzles won't have it winning any awards any time soon.

Not one of the best games ever, but it's a nice little time killer, and a good, if flawed end to the GameBoy Color's reign.